AORUS has officially unveiled their flagship Z690 Xtreme WaterForce motherboard which is going to cost over $2000 US.

AORUS Z690 Xtreme WaterForce Motherboard Pictured, Costs Over $2000 US & Only 200 Units Will Be Produced

The AORUS Z690 Xtreme WaterForce is the company's flagship offering, even one step above the Xtreme itself. The main difference is that the WaterForce rocks a full cover monoblock that covers the CPU, VRM, and PCH. Aside from that, the motherboard looks absolutely fantastic but it will be produced in limited quantities. 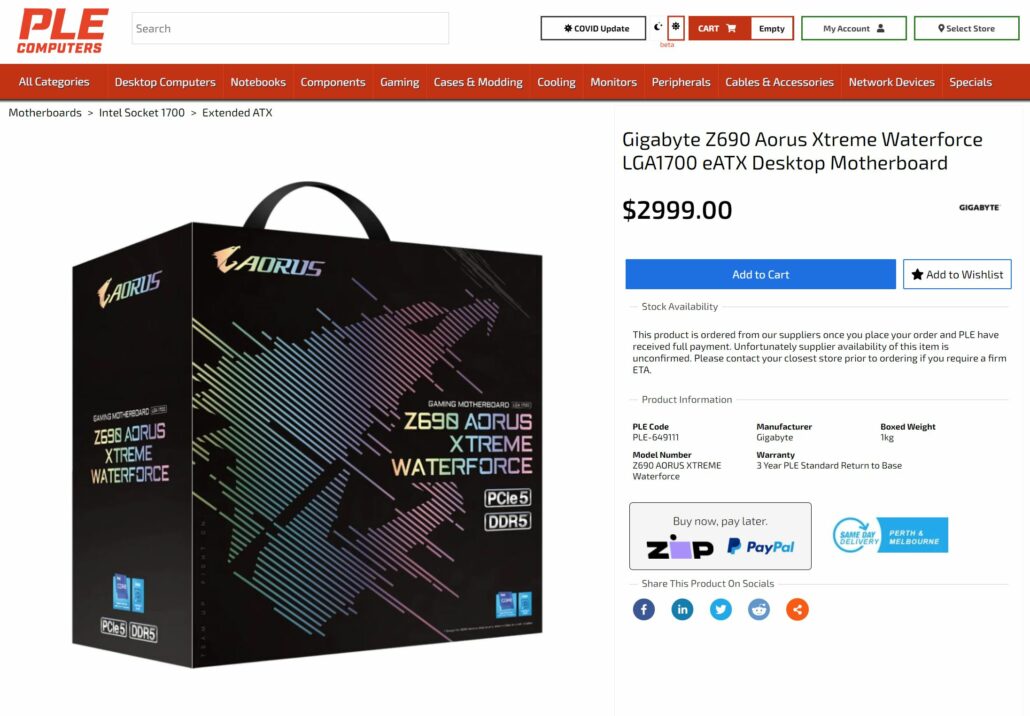 Gigabyte's flagship Z690 AORUS Xtreme WaterForce motherboard has been listed for a price of over $2000 US. (Image Credits: Videocardz)

Gigabyte has a lot of new features to talk about so let's talk about the new VRM design that they are offering this generation. Gigabyte is going with a fully direct Digital VRM design that will comprise up to 20 VCore Phases (105A Power Stage), 1 VCCGT Phase (105A Power Stage), and 2 VCCAUX Phases (70A DrMOS). Just like the previous generation, Gigabyte is using Tantalum Polymer Capacitors for higher efficiency and lower voltage while maintaining lower temperatures so expect top-notch overclocking performance on the AORUS Z690 Xtreme WaterForce board.

Obviously, we can't move on without mentioning some features such as PCIe 5.0 where Gigabyte is offering up to two Gen 5.0 slots (x8 / x8 mode). The slots come with an SMD Iron Claw that reduces overall signal degradation while the multi-point stainless steel pins increase the overall durability of the slots. You also get up to 4 PCIe 4.0 x4 slots, Thunderbolt 4 support, 20 Gbps USB 3.2 Gen 2x2 ports, and USB Type-C front panel headers on all Z690 motherboards,

The top motherboards are outfitted with 10 GbE Aquantia LAN ports while you will find 2.5 GbE networking as a standard on all Gigabyte Z690 motherboards. There's also WiFi 6E support with brand new Antennas and you will find a new HEX ESS ES9080A 8x8 channel DAC line driver on the high-end designs. Of course, the standard Z690 Xtreme won't cost as much as the WaterForce since it doesn't feature an AORUS monoblock that literally is 30% of the entire cost of the board. But even the standard variant is aimed at premium users and should cost close to $1000 US if not over that. You can see AORUS's complete Z690 motherboard lineup here.