Android OS suffers from an audio latency issue, which has affected the reputation of the OS among the audiophiles. This is one of the major reasons why music creators prefer working on iOS than Android. Google is aware of the shortcoming and has been continually working on fixing it, but it looks like there is a long way to go before making Android better for audio lovers. A new report suggests that Google's latest Android version - Android 8.0 Oreo has worsened the audio latency issue.

A report from Superpowered suggests that the audio latency issue on the Nexus 6P has become worse after updating it to Android 8.0 Oreo. They tested the device to know about the progress that Google has made regarding resolving the issue on the OS. They used Google’s own “Rick’O’Rang app” and private Latency Test applications to figure out the intensity of the problem and how profoundly it affects the sound quality on Android phones. When testing the Oreo update on the Nexus 6P, they noticed that their own Latency Test app started malfunctioning.

The Latency Test app by Superpowered showed a latency value fluctuation while Google’s own application displayed good, plausible, and low latency values. It's worth noting that Google’s glitch measurement feature did suggest that something was just not right, but it was overlooked by many as it didn't mount much concern. Superpowered tuned its Latency Test app while Google is yet to fix it app.

To sum it all, Google still has a long way to go to make Android suitable for music aficionados. 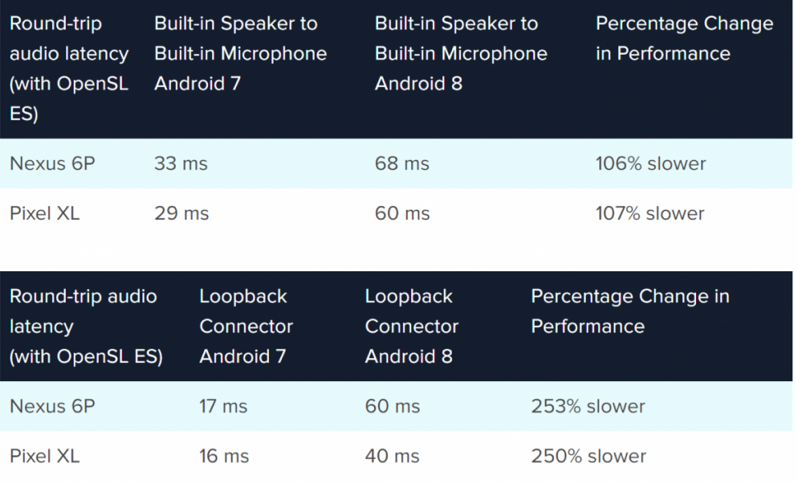 As you can see in the image above, audio latency on Android 8.0 is higher on Oreo than Nougat. This could also be related to hardware difference on the devices.