Samsung's much-awaited Android 10-based OneUI 2.0 is finally here, at least in beta form. We expected it to make its way to users' devices sometime this week. Today, some users in the EU who signed up for the program have reportedly received an OTA update that bumps them up to Android 10. Let's take a look at what Samsung has in store for us. Here's the changelog, as spotted by Phonearena, who were lucky enough to get their hands on the build. 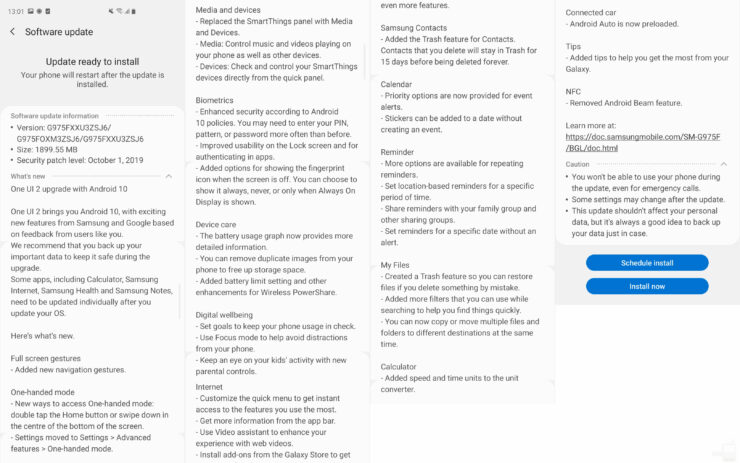 As expected, OneUI 2.0 brings with it Android 10's revamped Navigation Gestures. Like all Android 10 devices, you can opt for Google's new navigation gestures, keep the existing Android Pie based gestures or use navigation buttons via a toggle in the settings. There's even an option to allow the back gesture on the keyboard, but you need to enable this in the settings.

While we're still on the topic of batteries, another minor change that OneUI 2.0 brings has to do with Wireless Powershare. The feature made its debut on the Galaxy S10 series and is useful for charging peripherals such as Galaxy Buds and Smartwatches. You can now set a specific battery percentage at which the Wireless Powershare option will disable itself automatically. Previously, it shut itself off at 30% battery by default and now, you have more granular control over it.

Another highly-awaited Android 10 feature has been baked into OneUI 2.0 in the form of Smart Replies. Through a toggle in the settings, you can choose to enable or disable Smart Replies which will over a bevy of suggested actions for every app. Based on your usage patterns (and the app in question) it can recommend replies ranging from generic "I am busy please text me later" statements to emoji-based replies.

Some of the other changes include redesigned volume sliders, a new one-handed mode, Lockscreen and Always-on display changes, Digital Wellbeing, and a fresh coat of paint for some Stock apps such as Contacts and Messaging. If you've signed up for the beta in the EU, expect to receive an OTA update sometime bearing build version G975FXXU3ZSJ6. I haven't had the chance to review the build myself as the beta is not available in my region just yet. Watch this space for additional information about all things OneUI 2.0.