The AMD Ryzen Threadripper 3990X would be the flagship HEDT processor for 2020, offering 64 Zen 2 cores and 128 threads. This chip is the ultimate enthusiast and workstation tier processor that any chip maker has produced to date. The chip is on a tier of its own with no competition in sight from their rivals but it does take on Intel's Xeon Scalable parts which are aimed at the HPC and datacenter market.

The AMD Ryzen Threadripper 3990X was introduced to the world at CES 2020 and as expected, it features a gargantuan 64 cores and 128 threads, making it an absolute beast. The core and thread counts are astonishing and unlike anything that we have seen before on the HEDT platform, but AMD has pushed their HEDT platform hard and they are indeed bringing this super-massive chip to their TRX40 family.

In addition to the specifications, the latest AGESA 1.0.0.3 BIOS update for the 3990X CPU support is rolling out on various TRX40 motherboards as reported by Momomo_Us. ASUS also unveiled their new flagship motherboard, the ASUS ROG ZENITH II EXTREME Alpha which is designed exclusively for the 3990X and would be hitting retail shelves this month.

In the latest set of benchmarks, the chip scored a very impressive 1786.22 GOPS in the arithmetic test, outpacing the dual Xeon Platinum 8280 setup by 17.8% on average. The CPU also managed to maintain an operating frequency of 4.35 GHz in the same benchmark which is very impressive for a 64 core part operating within a TDP of 280W. AMD has also previously showcased figures where a Ryzen Threadripper 3990X is able to outperform the same dual Xeon setup by up to 30%. 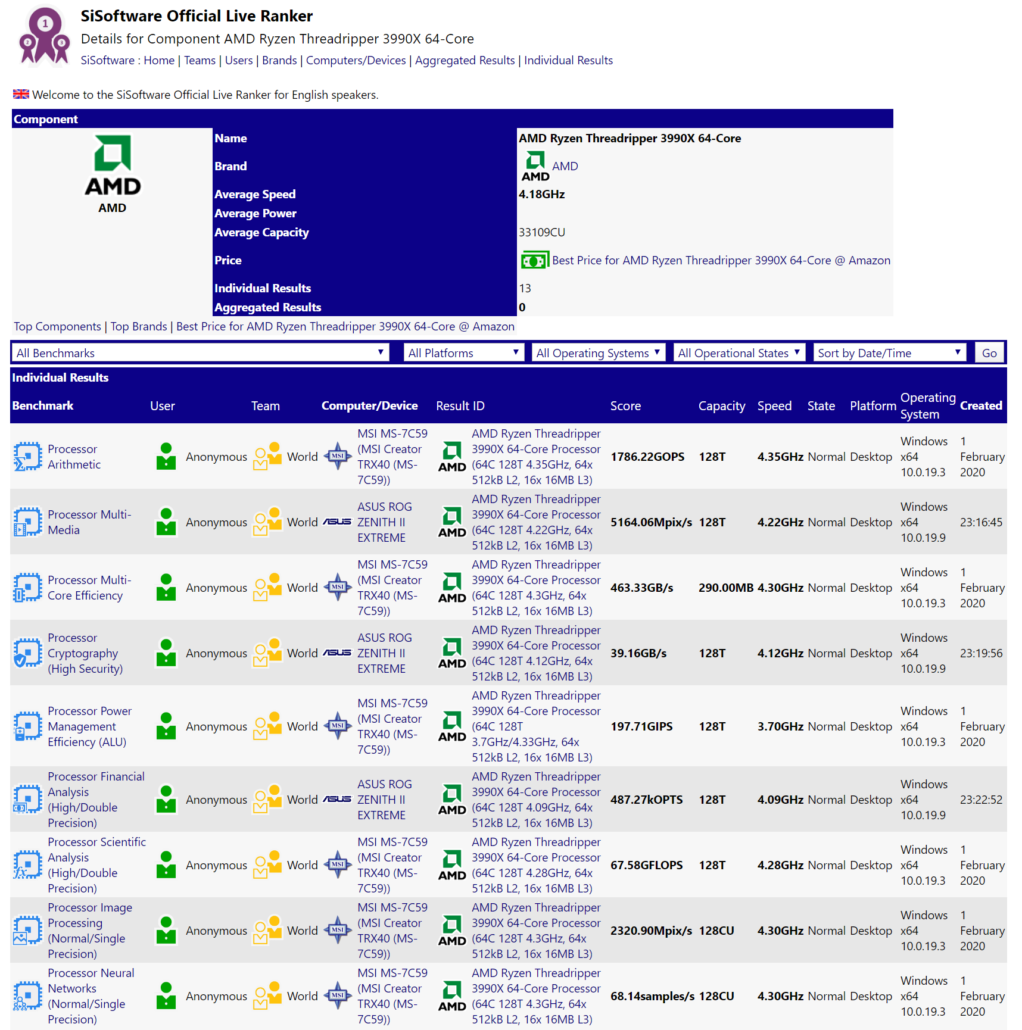 The main thing to consider here is that while each Xeon Platinum 8280 boasts 28 cores and 56 thread layout, making up a total of 56 cores and 112 threads on the 2S platform, each chip is worth $10K which is significantly higher than the Ryzen Threadripper 3990X which would hit retail at $4000 US. Despite the price cuts that Intel announced for their Cascade Lake lineup recently, each 8280 will cost $13,000 US, setting up the price of a dual Xeon 8280 setup over $20-$25K. Pricing is one thing but the absolute amounts of efficiency that the Zen 2 cores are also worth noting. We have already seen some impressive efficiency of Ryzen Threadripper chips and the 3990X is expected to push it even further upon release.

Compared to AMD 3990X, that's a 6.25x higher price which just goes off to show how much of a beating AMD is giving to Intel in the HEDT and server landscape. This also paints us a good picture of what's happening with Intel's server segment where EPYC, that is based on the same foundation of their Zen 2 lineup, is offering stellar price to performance value, outperforming Intel's Xeon lineup in every workload.

Rumors indicate that Intel has delayed Cooper Lake and Ice Lake Xeon processors by a few months (3 months shift in the schedule) and there are also reports that they would be announcing major price cuts and repositioning of CPUs in the second half of 2020 which might indicate more aggressive pricing with their next Xeon parts. But for now, the real enthusiasts and workstation builders should definitely be looking forward to the 3990X and its humongous compute power.