We recently published slides from a now-deleted HPC presentation that showcased some interesting facts about AMD's upcoming Zen 3 Milan platform and while that was informative, it wasn't the full picture. As it turns out, however, Planet3DNow has managed to get their hands on the complete set and there are a few more choice slides in here.

Let's start with the SpecIntRate_2017_rate_base figures. This is one of the more well-known performance estimates for high-performance computing and is a category that has historically been dominated by Intel. Intel's Cascade Lake-based Intel Xeon 8280 scores 359 points here. It is worth noting here that this is a dual-socket system at 28 cores each for a total of 56 cores. AMD's EPYC 7742 64-core processor on the other hand scores 654 points. This is roughly twice the performance of the Intel counterpart and if you think this is impressive, wait till you consider the pricing implications. 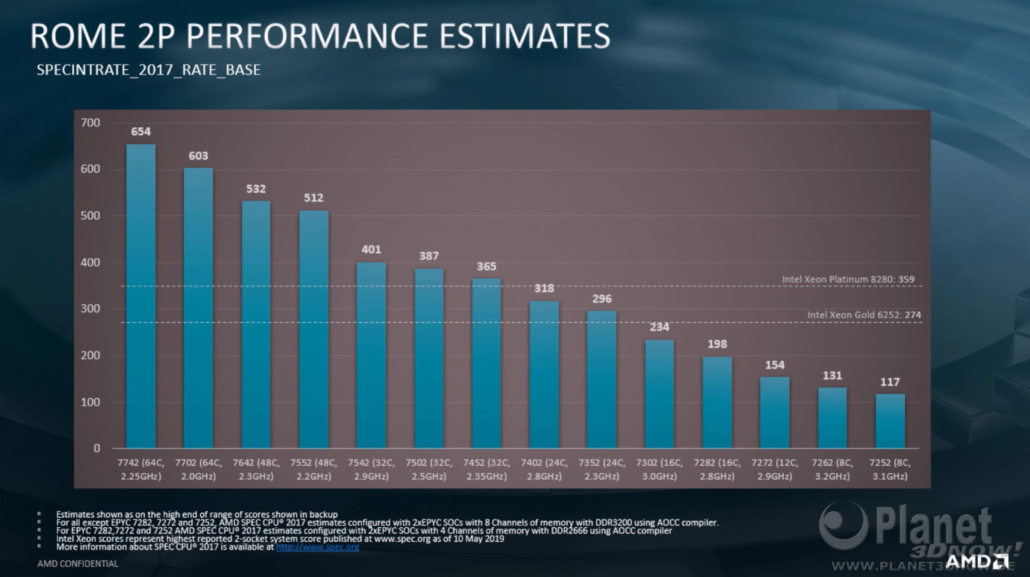 AMD's first-generation fo EPYC was great but it was lacking in the HPC department and Intel was still arguably justified in charging a premium. The Rome CPU, however, puts an irrevocable end to that. Not only is it faster in HPC by a long shot, but AMD has still managed to retain its consumer-friendly pricing. The end result? You are looking at a CPU worth $6,950 beating out a $20,000 system. If you translate this to a performance per dollar figure, you are looking at a 5.2x lead for the AMD part! That is absolutely insane and I am willing to wager whatever TCO (total cost of ownership) model you use, this is going to be a significant factor.

We see a somewhat similar situation in the GROMACS ARCHERII benchmark where the cascade lake 8280 setup achieves 4.498 nanoseconds per day while the EPYC 7742 scores 6.329 nanoseconds per day. This is a pretty huge speed up and something that is further expounded by the differential in price.

Most HPC decisions are made using performance per dollar and Total Cost of Ownership (TCO) which includes ancillary costs like cooling, power consumption, ecosystem costs etc. While Intel has historically had better TDPs, this pretty much goes out of the window here because 2x Xeons will always consume more power than AMD counterparts. The solution is to go towards Intel's AP based SKUs that will offer equivalent performance in a single package. The downside? those are even more expensive than these ones!

The AMD EPYC Milan processors will succeed the current EPYC Rome lineup. The fundamental change for the EPYC Milan lineup will be the new Zen 3 core architecture which will be based upon a 7nm+ process node. From what we know and what AMD has officially shown, the AMD Zen 3 based EPYC Milan processors will focus primarily on performance per watt enhancements but that doesn’t mean we won’t be looking at core updates. While performance per watt is at the core of Zen 3 cores, they would also deliver an uplift to overall performance as stated by AMD’s CTO, Mark Papermaster.

AMD has shown that unlike Zen 2 which has 16 MB of L3 cache per CCX within a CCD, Zen 3 would feature a shared cache (32 MB+) for each die. This would allow all cores to share the entirety of the L3 cache available on the die rather than each CCX having its smaller and separate cache shared among the cores. This may also be a potential confirmation of Milan offering 8 Zen 3 cores within a single CCX. AMD also confirmed that they are currently sampling the first Milan CPUs which is fantastic news for customers awaiting the chips in 2020.

There had been some speculation involving SMT4, but we have seen nothing to that effect in these slides. Then again, our sources have told us there is a 15 die variant of Milan and we didn't see anything about that in these either, so who knows. Needless to say things are starting to get very heated up in the x86 space and unless I am very much mistaken, price cuts from Intel for their Xeon parts are in order (if they want to return the market place to normalcy).