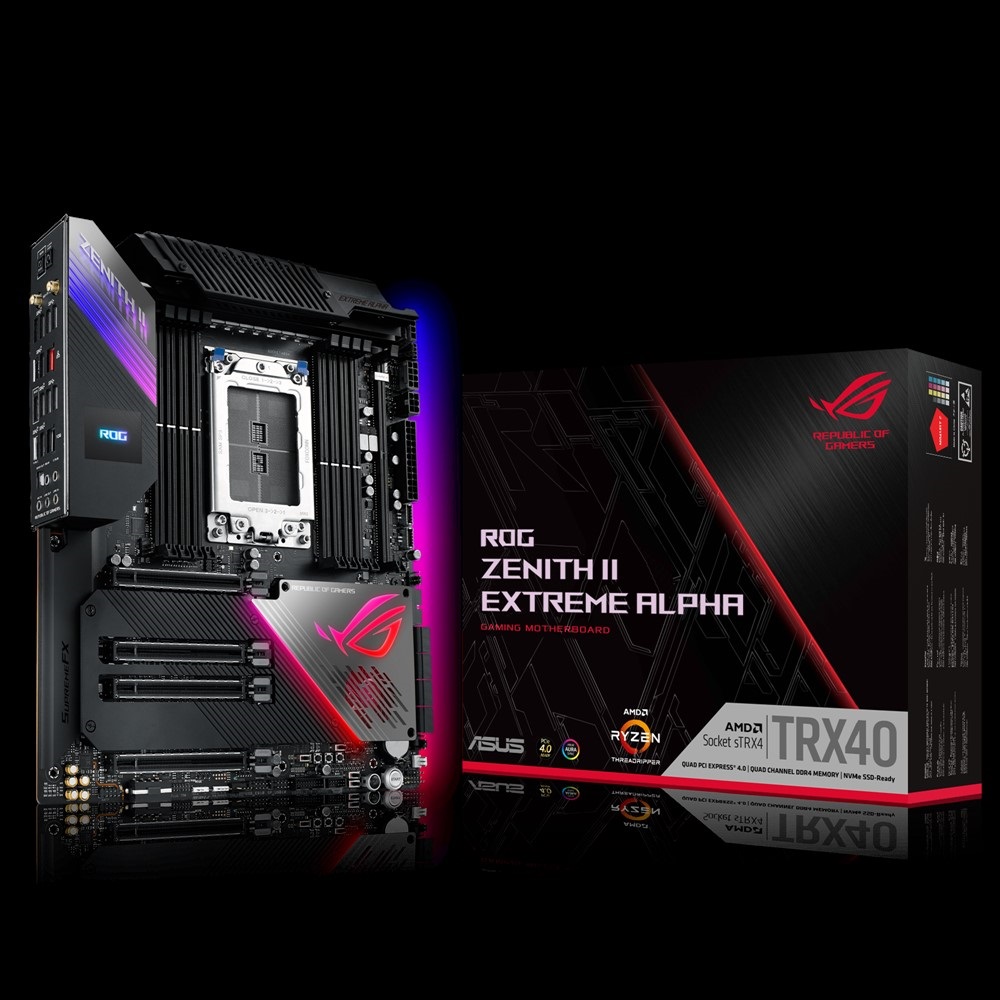 ASUS has unveiled its flagship TRX40 motherboard, the ROG Zenith II Extreme Alpha, which is designed from the ground up to power AMD's upcoming 64 core behemoth, the Threadripper 3990X. Featuring unparalleled and unconstrained power, the ZENITH II Extreme Alpha is a beast motherboard, featuring 16 Power Stages, support for 4733 MHz DDR4 memory and a total of 15 PCIe Gen 4 M.2 slots.

Just like the ASUS ROG Zenith II Extreme, the ASUS ROG Zenith II Extreme Alpha carries one of the best TRX40 motherboard designs but has been pushed one step ahead. Two of the major changes that the Alpha variant introduces are PCIe Gen 4 support through the added Hyper M.2 expansion card and upgraded Power Stages, that are designed specifically to support AMD's upcoming Ryzen Threadripper 3990X, 64 Core processor. Some highlighted features of the motherboard include: 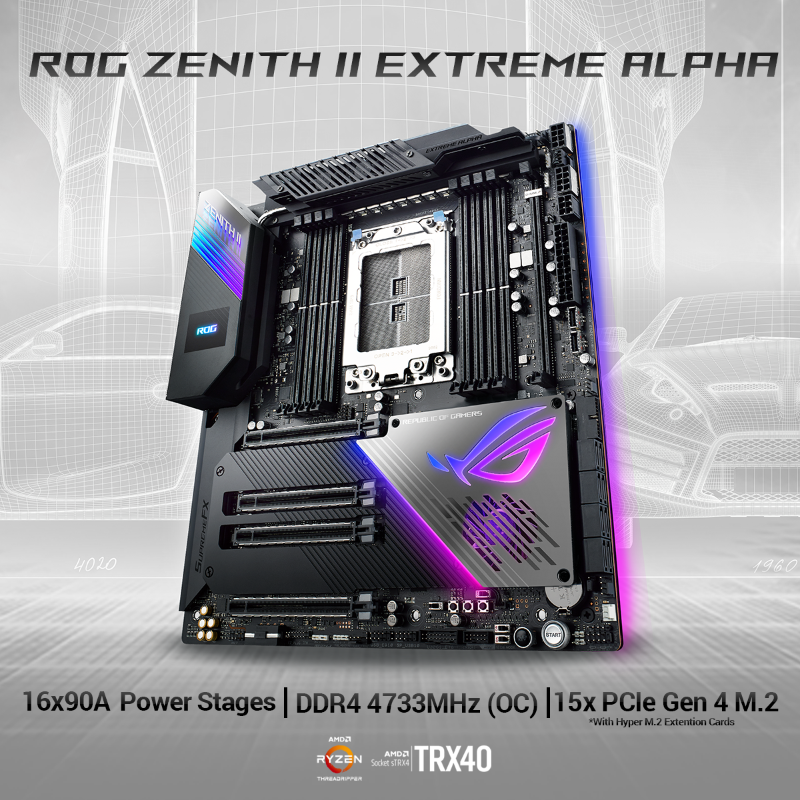 The motherboard carries one of the most powerful VRM design and feature set of all TRX40 motherboards releasing today. Sticking true to the ROG design aesthetics, the motherboard carries the massive sTRX4 socket which is powered by a 16 Infineon TDA21490 power stages, each of which is rated to handle 90 Amps. The ROG Zenith Extreme II features 16 Infineon TDA21472 power stages which were rated at 70 Amps. The motherboard additionally features microfine alloy chokes, 10K Japanese capacitors and three power connectors for the CPU alone (8+8+6 Pin). There are a total of eight DDR4 DIMM slots on the motherboard which can support up to 4733 MHz OC+ pin speeds with maximum capacity support of up to 256 GB (ECC/non-ECC).

The motherboard has four PCIe Gen 4 x16 slots and a total of five Gen 4 M.2 slots. Two of the M.2 slots are located between the PCIe slots and are covered by the front cover of the motherboard which includes extra heatsink based cooling. There's also a DIMM.2 slot that comes with the ASUS DIMM.2 module, offering two extra M.2 slots. Then there's a fifth M.2 slot located on the back of the motherboard. There's also support for ASUS's latest Hyper M.2 x16 Gen 4 card which allows you to use up to 15 M.2 drives in total, taking full advantage of the PCIe Gen 4 lanes that the Ryzen Threadripper CPUs have to offer. For storage, we are looking at 8 SATA III ports and a range of USB 3.2 Gen 2 and USB 3.1 Gen 2 front panel headers.

The whole VRM is covered by a massive heatsink which has two active cooling fans installed within it. There's a heat pipe that leads to a secondary heatsink hidden beneath the I/O cover. The I/O cover comes with a 1.77" Color OLED panel which replaces the DEBUG LED and displays other vital motherboard information too such as CPU frequency, voltage, temperatures. There are power and reset switches located on the motherboard along with tons of fans and RGB connectors. The TRX40 PCH heatsink is also covered by a solid metal heatsink with active cooling making it the 3rd fan installed on this motherboard.

There's a silver reflective plate featured on the PCH heatsink which features the iconic ROG eye logo. Other features of this motherboard include the Aquantia 10G Ethernet, Intel Gigabit Ethernet LAN, Wi-Fi 6 and SUPREMEFX 8-channel audio system. Considering that the ROG Zenith II Extreme is already on retail for a price of $869.99 US (Amazon), the Alpha variant is expected to be priced close to $1000 US. So if anyone considering buying the Alpha with the 3990X, the motherboard and CPU alone would end you up with a total cost of $5000 US.