Via the website Videocardz, well-known informant @KOMACHI_ENSAKA on Twitter has leaked details about the recent driver releases by AMD pointing towards the possible future launch of the Radeon RX 6600 GPU and RX 6600XT GPU, complete with the Navi 23 GPU. AMD currently uses the Navi 23 in their Radeon RX 6600M mobile GPU. Both GPUs listed in the driver update correspond with the "73FF" PC Device ID as shown below.

Earlier this year at CES 2021, AMD informed their audience that they would be releasing a graphics card sporting a single-fan setup in the future. With this new leak, it looks like they were talking about  the Radeon 6600 GPU and 6600XT GPU - each housing a Navi 23 GPU. Based on the driver update entries and the hints from AMD, it is likely that we are looking at a simaltenous launch of the two graphics cards. 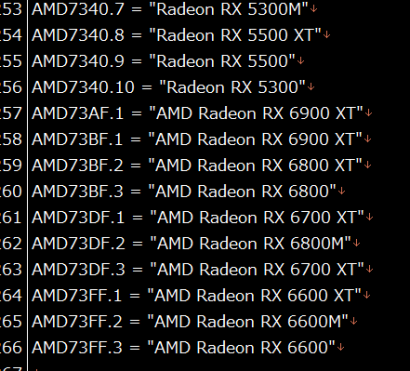 Currently, AMD has launched the mobile RDNA2 series which is currently being used in the ASUS ROG Strix G15 laptops. The current laptops feature RX 6800M graphics. AMD has also mentioned the upcoming launch of its Radeon RX 6700 XT series to stay competitive with other manufacturers.

AMD's Navi 23 GPU provides a 128-bit memory bus and processes up to 2048 streams of data. Elon Musk, CEO of Tesla, currently has in use, the AMD Navi 23 in his Model S vehicles. Musk has stated that the performance of this system will rival Sony's Playstation 5 gaming consoles. The Navi 23 GPU utilizes 10 TFLOPs (also known as teraFLOPS -- equal to one trillion floating-point operations per second) of computing performance and adopts up to 100 watts of power, which is currently in the AMD Radeon Pro W6600 graphics card for high-end office workstations.

Long story short, based on the timing of this leak, we expect the AMD 6600 and 6600XT GPU launch to be imminent (within a quarter).

Keep following Wccftech for more details from AMD as they appear!