AMD is preparing their latest Radeon R7 250X for launch next month which would be placed directly against the GeForce GTX 750 series from NVIDIA which packs the Maxwell core. Reports from Fudzilla suggest that the R7 250X would be a HD 7770 rebrand. 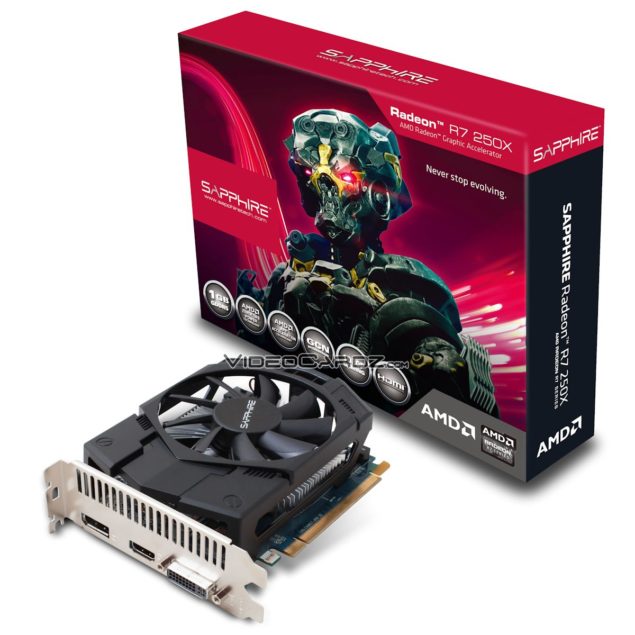 AMD has quite a few sub-$100 SKUs which include the Radeon R7 250, Radeon R7 240 and the Radeon R5 230. The Radeon R7 250X would be the latest addition to this entry-level lineup packing the Cape Verde (Oland) core with 640 Stream processors, 40 TMUs and 16 ROPs. The clock speeds from an early listing of the Sapphire Radeon R7 250X which was leaked by Videocardz mentions a 1 GHz core and 4.5 GHz effective memory clock.

The card would be available in both 1 GB and 2 GB models and non-reference models would be available at launch so you'll see each a diverse selection of R7 250X GPUs with their own set of coolers and designs from manufacturers. The Sapphire card in particular is just about the length of a PCI-e slot (a decent solution for a Steam Machine) and features a DVI, HDMI and Display port. Power is provided through a single 6-Pin power connector.

The card looks really interesting from the specifications which are a leap over the Oland based R7 250 and R7 240 but the extra performance results in higher power consumption so the card will feature a 6-Pin connector which compared to its Maxwell based GTX 750 counterpart is a downside. Maxwell is an extremely efficient design as being noted by the entry-level parts which are based on 28nm process but offer better specifications compared to their predecessors with a low power budget. AMD on the other hand is offering a rebranded HD 7770 to tackle the GeForce GTX 750 for $99 (same pricing as the GTX 750) which isn't bad either. The new entry-level cards will end up putting a heated competition in this price range.