NVIDIA's upcoming Maxwell based GeForce GTX 750 Ti and GeForce GTX 750 have been leaked and previewed by custom PC site, UKGamingComputers (via Videocardz). The surprising thing is that this is the second leak regarding the cards that is from a PC builder since the Chinese leak we saw earlier was also a custom gaming PC listing which included the GeForce GTX 750. 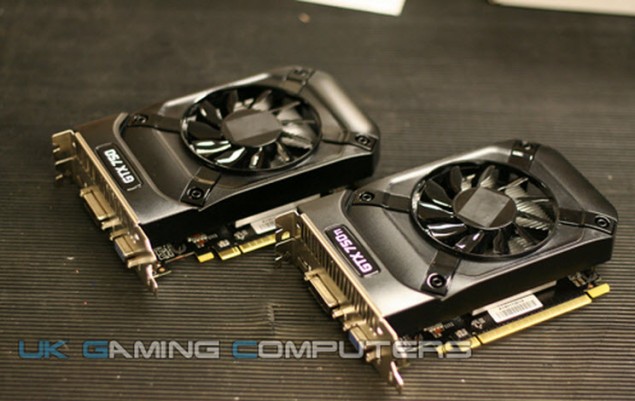 As expected, Maxwell is headed to consumers soon and will bring new levels of power efficiency, something that NVIDIA has strive to deliver with their Kepler generation of graphics processing units. Maxwell will have approximately three Tiers basically, Tier One will consist of 200W+ Discrete GPUs. The lowest tier will have 2W and 3W SoC Tegra Parts and ultra low voltage gpus. The middle tier will cover everything in between. The first GPU will ofcourse be the GM107 and will come in both Desktop and Mobile parts. The GeForce 800M lineup got announced a while back so it will be interesting to see some entry-level chips featuring the new core. The specs for both cards are detailed below:

The NVIDIA GeForce GTX 750 (Non-Ti) is also based on the GM107 core architecture featuring 512 CUDA Cores, 32 TMUs, 16 ROPs and a 1 GB GDDR5 memory interface. The clock speeds for this graphics card are configured at the same 1085 MHz core and 1163 MHz boost but the memory runs slower at 5.1 GHz effective clock speed (1275 MHz QDR). Its safe to assume that these are factory overclocked models since we have already seen the previously listed GTX 750 with lower clock speeds of 1020 MHz core. The GeForce GTX 750 is also planned for launch on 18th February and would stick close to the $100 US price range.

*Note - The clock speeds are not confirmed since these are factory overclocked variants.