AMD has officially launched their latest Catalyst Omega driver which brings several performance updates and a list of new features to AMD's Radeon line of graphics family and their A-Series APU family. We reported about the Catalyst Omega driver last week however, we had to pull our article since the embargo ended on December 9th (as reported by AMD). Hence today, we will be giving you a complete coverage of what to expect from the latest addition in AMD's Catalyst drivers.

While the drivers adds 20 new features which we will detail in this article, it also fixes several bugs and helps improve performance in several titles, enhancing Crossfire, Mantle, Freesync support in several current and upcoming gaming titles. All the improvements from previously released drivers ((14.2) are carried over to the new ones while adding new features. The new driver is labeled as 14.50 but is tentatively called the Catalyst Omega driver. So starting off with the new features, first of all, we have the latest 4K Virtual Super Resolution technology.

AMD 4K VSR (Virtual Super Resolution) technology is similar to NVIDIA's 4K DSR (Dynamic Super Resolution) technology. AMD focuses on scaling the monitor to resolutions beyond the native resolution for both games and even Windows desktop. This technology has been missing from AMD Radeon cards for quite a while and it looks like AMD has finally listened to the audience after much demand of this specific feature. With a similar affect as NVIDIA's 4K DSR, the 4K VSR tech provides downsampling in games by delivering 4K quality on a 1080P monitor that enhances AA relative to SSAA (Super Sampling Anti-Aliasing). VSR also enables higher textures and smoother edges. AMD's Radeon R9 295X2, Radeon R9 290X, Radeon R9 290 and Radeon R9 285 can support this feature without any hassle on single and  multi-GPU configurations. You can see the table below for supported VSR modes:

How to enable VSR from AMD CCC:

The Windows desktop can also be configured in a similar way, if the VSR benefits are desired for applications that run on the desktop or in a window. Right-click on the Windows desktop and choose ‘Screen resolution’ from the pop-up menu. When VSR is enabled, you will see additional resolutions in the list. Below is a screen capture of the AMD Catalyst Control Center showing the settings tab to enable VSR.

The Project Freesync is termed as AMD's effort to bring variable refresh rate monitors to consumers to allow tear free and lag free gaming. While their rival NVIDIA already has solutions based on their G-Sync technology out in the open market, AMD is still a few months away to launch their first Freesync monitors in Q1 2015. The difference between G-Sync and Freesync is that Freesync relies on open standard Adaptive-Sync which has been incorporated into Displayport 1.2A on AMD's proposal to VESA. This allows for lower manufacturing costs and gives users easy access to tear free gaming.

Adaptive-Sync capable monitors solve three distinct issues in games. The first issue is tearing, tearing occurs mainly whenever the frame rate exceeds the refresh rate of the monitor. The second issue is somewhat related to the first, as stuttering can occur if the frame rate exceeds or falls behind the refresh rate. The third issue is input-lag, which occurs when you enable V-Sync to get rid of tearing and stuttering. So before variable refresh rate monitors had existed, irrespective of whether they were G-Sync or FreeSync enabled. You had to choose between either tearing and stuttering or latency.

FreeSync can support any range of refresh rates, for example 24Hz-144Hz, 24Hz-90Hz or even 24Hz-240Hz. And depending on the monitor maker they can opt for whatever range they want. So you can have all sorts of FreeSync monitors that span from the very high end 4K models to the 120Hz/144Hz “gaming” 1440p monitors and the more affordable 90Hz 1080p solutions. Which means that you will more easily find something that fits your needs and budget. When launched, Freesync will be limited to single monitor while multi-monitor support is planned for later. As far as compatibility is concerned, AMD's Freesync will work with AMD's latest FirePro and Radeon R9/R7 GPUs (Radeon R9 295X2, Radeon R9 290X, Radeon R9 290, Radeon R9 285, Radeon R7 260X, Radeon R7 260) and the Kaveri 7000-Series APUs.

AMD is working with Samsung on five Freesnyc enabled monitors which will be UHD (Ultra HD) compliant with 4K resolution support. These models include two UE590 variants with sizes of 23.6" and 28" while the UE850 variant will be available in 23.6", 27" and 31.5" sizes. The prices are not known but AMD is also working on 5K monitor support.

Since 4K arrived, GPU manufacturers have been racing towards 8K. AMD and NVIDIA are the leading graphics makers of the industry and their goal to race for higher resolution is valid but GPUs still lag behind on 4K so it will take some time for us to see an actual implementation of 8K visuals on a large consumer scale but for now, resolutions like 2K (2560x1440), 4K (3840x2160) and 5K (5120x2880) are going to become more common. For this purpose, AMD is enabling support for higher resolution screens with 5120x2880 @ 60 Hz. The monitor is from Dell and called the UP2715K. It features a pixel count of 14.7 million with density of 218 pixels per inch and includes Dual Display Port 1.2 input.

How to enable 5K Monitor Support:

Finally, an update to AMD's most iconic technology, Eyefinity, has arrived in the form of 24 Display Eyefinity which now gives users the ability to run smooth, tear free video playback with up to 24 displays (through 4 GPUs).

On the developer front, AMD has announced the latest TressFX 3.0 Hair renderer which has been added to the Catalyst Omega driver that adds rendering of hair on fur on skinned geometries. There are several new libraries included for developers to read and render as opposed to the recent TressFX 2.0 update which improved overal performance.

OpenCL 2.0 and support in SDK 3.0 have been updated with the new driver release giving a truly open programming standard for general purposes computing and heterogeneous systems. OpenCL allows programmers to preserve source code investment and easily target multi-core CPUs, GPUs, and APUs. Developed in an open standards committee with representatives from major industry vendors, OpenCL gives users what they have been demanding: a cross-vendor, non-proprietary solution for accelerating their applications on CPU, GPUs and APUs. AMD, an early supporter of OpenCL and leading innovator and provider of high-performance CPUs, APUs and GPUs, has delivered a complete acceleration platform for OpenCL.

AMD's Fluid Motion technology tries to interpolate inferred frames with real frames and increase overall video frame rate and smoothness when watching Blu-ray videos. The feature can be enabled through CCC and will be supported on AMD's Kaveri lineup (35W+) along with all the GPUs above the Radeon R7 260. Contour removal is a pretty neat technology that removes artifacts from compressed videos enhancing the detail. It can also be enabled via AMD CCC and has the same hardware support. The other two features, 1080P Detail enhancement and UHD-Like Experience enhance a sub-1080P and sub 4K image to superior detail by processing through an in-built algorithm. 1080P detail enhancement works only with Kaveri APU and AMD Radeon R9 285 GPU while the UHD tech will work on Kaveri APUs and Radeon R7 260 or higher GPU. Finally, we have a large list of Omega features to list after which we will move to performance: 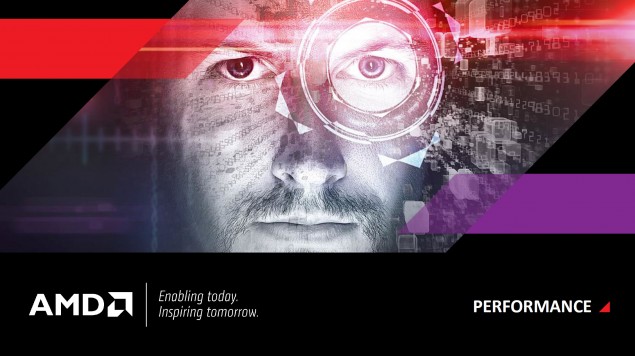 With all the new features listed and explained, we now come to the performance results. As expected, the Omega drivers carry over all the improvements from previous drivers delivering much better gaming and application experiences. The performance improvement is rated at up to 19% for AMD Radeon R9 290X, 29% for AMD A10-7850K APU and a large list of bug fixes eliminating the crashes and black screen issues which occurred to several AMD users over the previous few months. Compared to the 14.9 drivers, the 14.50 Omega is around 15% better in performance however we will take a closer look. 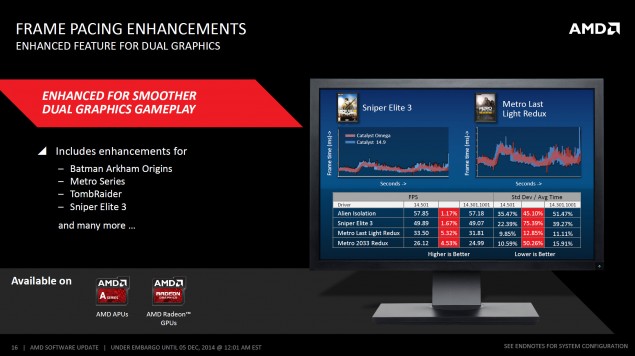 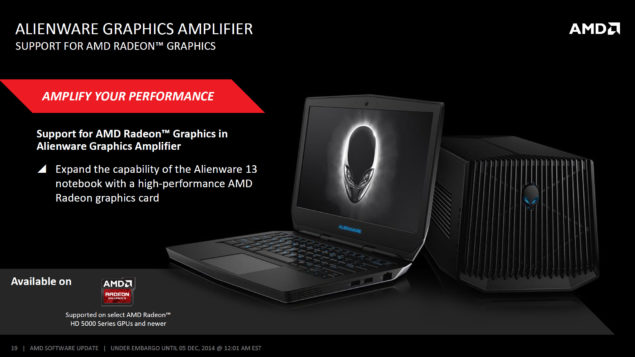 Last month, Alienware announced their graphics amplifier for notebooks which is an external graphics adapter which can support a discrete level graphics card to add more performance for gaming without the need to use SLI or Crossfire configurations in mobility solutions that drain a lot of battery. The graphics amplifier can suppor both AMD and NVIDIA graphics cards with driver updates and AMD even shared some numbers of how much performance a Alienware notebbok will deliver when amplified with a discrete Radeon R9 290X graphics card.