Picture of AMD's Upcoming next generation Radeon HD 7900 Series GPU has been leaked by a Beyond3D.com Forum member. The cards running which can be seen running in CrossfireX mode are still in engineering phase and based on the Tahiti Core. 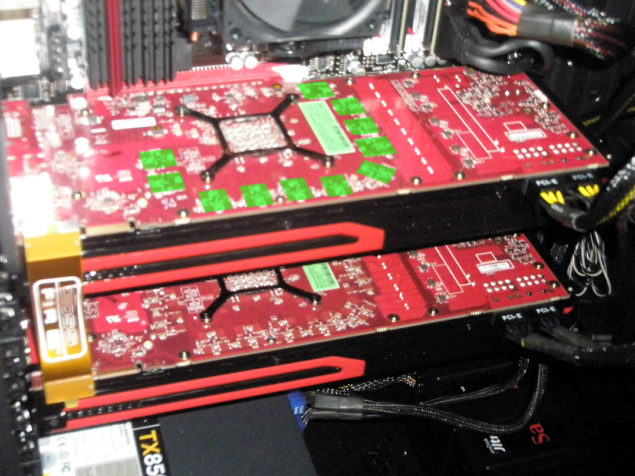 One thing to note is that the card features a total of 12 Memory Units (11 can be easily spotted while the 12th is located near the PCI-e interface) confirms the use of 384-bit memory bus on the high end GPU's. This would be the first time AMD would switch from 256-bit GDDR5 to a higher bus of 384-bit.

The HD 7970 will have a TDP of 210 watts, Power is being supplied through what looks like a 6 and 8 Pin Power Connectors though this isn't yet confirmed. TDP Good thing is that the reference heatsink and cooler is intact which means the new Liquid Chamber Cooling is ready for the cards. Also to learn more about AMD's upcoming Southern Island GPU's, Check out the following links: