A consumer platform guide of AMD has been leaked which confirms core frequencies of three upcoming Vishera FX processors including the flagship FX-8350 which turbos upto 4.2Ghz. 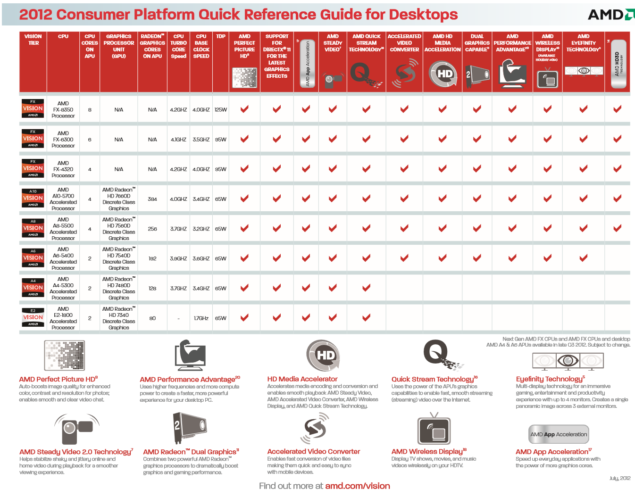 The guide details specifications of three upcoming Vishera FX processors which would be featuring the Piledriver x86 core architecture. Leading the pack is the Octa-Core FX-8350 running at a stock speed of 4GHz with Turbo Core frequency of 4.2GHz on all cores. The CPU has a rated TDP of 125W and features 8MB of L3 Cache.

Price wise, the new Vishera processors would cost lower than their Intel Ivy Bridge counterparts. The guide also details a few Trinity APU's which we already covered back here. You can also check out a brief performance measurement of the FX-8350 processor here. Launch of Piledriver is expected in Q4 2012.

In other news, there are chances we won't be looking at a successor to Piledriver since rumors suggest it is the last of performance offering from AMD. AMD has yet to comment on that, Read more about it here.