AMD has released a new statement on their Zen FX processors during their latest earnings call. According to the statement, AMD expects first shipments of their Zen products later this year which highlights their readiness for bringing their new processor lineup in the desktop PC market. The Zen processors were announced in 2015 and are expected to be available to PC builders in late 2016.

The AMD Zen Core is aimed at Desktops, Laptops and Server platforms.

The AMD Zen based FX processors are highly anticipated by enthusiasts and gamers around the globe as these chips will bring the performance of CPU on par with Intel's latest processors at very affordable rates. AMD has previously stated that Zen will be shipping in large volume to partners in Q3 2016 but the recent statement is a bit different. AMD's CEO, Lisa Su, had the following to say during the earnings call:

We have been very focused on the server launch for first half of 2017. Desktop should launch before that. In terms of true volume ability, I believe it will be in the first quarter of 2017. We may ship some limited volume towards the end of the fourth quarter, based on how bring up goes and the customer readiness. Lisa Su, AMD CEO via AMD

According to Lisa, AMD expects to ship a limited run of their Zen chips to partners for testing and evaluating the readiness of the Zen platform on desktop PCs. This shipment will be commence in Q4 2016 and depending on a variety of conditions which will ultimately determine how many chips will be available for High-end desktop PCs as AMD is targeting enthusiast gamers and PC builders first with Zen. 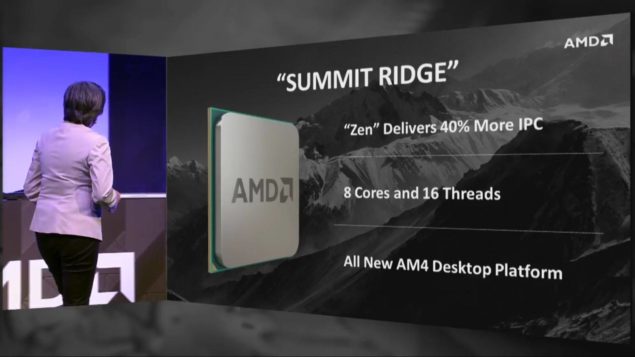 After the limited shipment, AMD would commence full volume shipments in Q1 2017 which means that Zen will be available in full range in early 2017. Many users are waiting to build off their new PCs with AMD's latest chip and to do that, they will have to wait for the first shipment of high-end chips that will probably hit retail in 2016 (Q4). A limited run during the winter holiday season might also prompt AMD to ask for a premium price on their high-end Zen chips with the more price-tuned models shipping in Q1 2017 when wider shipments are available.

Based on a 14nm process node, the Zen chips are the first in many years which AMD alleges to perform on par with Intel's current generation processors (Skylake). While AMD has presented these numbers on paper where they have hinted that Zen has 40% better IPC compared to their previous generation CPU architectures, there are still not details on actual numbers as far as the performance, efficiency and pricing are concerned.

Knowing AMD, they will hit Intel with very competitive prices and their chips are alleged to feature 95W TDP, the same as Intel's upcoming Kaby Lake-S desktop processors which start shipping in Q4 2016. Aside from the limited details we have on specifications, AMD did demo their Zen processor at Computex and E3 2016 during June and showcased the chip running different applications.

AMD was also kind enough to share some details on the specifications for the Summit Ridge processors. The Zen architecture is simply deployed in Summit Ridge family of FX processors. To make it simple, Summit Ridge stands for the family name, Zen stands for architecture name and FX will be the branding used to determine the various SKUs in the lineup. Specifications of Zen based chips would include 8 cores and 16 threads. The chips can scale up and down depending on the modules enabled or disabled.

Desktop PCs are just the tip of the iceberg. Sure AMD wants to take back the processor market share with a very competitive lineup but they don't want to just be focused in the desktop PC department. AMD Zen will deploy its cores on several Opteron and APU SKUs. AMD has already mentioned that they have dual socket systems utilizing their Zen based Opterons in their R&D labs with up to 32 cores, that's four modules of AMD Zen 8-Core design. Also for Raven Ridge, AMD will be deploying their Zen CPU and Polaris GPU Duo processor architecture that will be featured in notebooks and laptops later in 2017. The Opteron lineup is expected to market in 1H 2017.

AMD seems to have Zen targeted at all markets but at the end of the day, the sole aspect that will determine Zen's success will be its performance and pricing against competition on Desktop, Laptops and Server platform.