In their recent earnings call for the fiscal year 2015, AMD confirmed that their Zen based Summit Ridge FX CPUs will be launching in late 2016. The Zen core which has been under development by AMD for the past two years will be introduced in two brand new processor families, codenamed Summit Ridge and Bristol Ridge which will be aiming the high-performance and mainstream consumer markets.

The earnings call showed that AMD did better than previous month reducing the overall operating losses and clearing away inventory however the company still posted a revenue decline of 10% in Q4 2015 and 28% in FY (Fiscal Year) 2015. Talking about the future plans of their company, AMD's CEO, Lisa Su, mentioned that their Zen based CPUs are well on their way to development and are aiming to achieve IPC leverage greater than 40% compared to their current generation Excavator cores found on the Carrizo processors. The Zen core will have a totally revised design, offering high core count, Simultaneous Multithreading Support (SMT), High-Bandwidth, Low Latency Cache and will be based on the FinFET process to allow better efficiency in client and enterprise platforms.

In client computing our opportunities to regain share in 2016 will be driven by our design win momentum, continued progress expanding into the commercial market and reentering the high performance desktop market late in the year with our Zen based Summit Ridge CPU. Our second growth pillar is in the $15 billion plus datacenter and infrastructure markets, driven by our FirePro GPU's and next-generation service CPU's. Our Zen based CPU development is on track to achieve greater than 40% IPC uplift from our previous generation and we're on schedule to sample later this year. AMD via SeekingAlpha

The Summit Ridge family is now officially confirmed by AMD in their latest roadmaps. The family will feature a range of processors based on the latest Zen core architecture. This core will be deployed in the high-end CPUs known as the FX Series. The Summit Ridge family is the official update to the Vishera family that was built upon the Piledriver core. Launched in 2012, the Vishera family replaced the Zambezi family which featured the AMD Bulldozer core architecture. After Piledriver, the FX series didn't receive any update as AMD's Steamroller and Excavator cores were aimed at the mainstream audience leaving the enthusiasts to stick to their older CPUs or move to Intel to feed their high-end needs.

That is going to change in late 2016 as AMD is bringing the high-end back to enthusiasts in the form of Summit Ridge FX CPUs. In answering a question to one of the journalists during the earnings, Lisa stated that AMD will be working with several OEMs  to bring Zen based PCs in the market later this year and have already closed in some design wins with the Zen processors while internally working with OEMs. Summit Ridge will be aiming the consumer DIY and OEM markets, feeding the needs high-performance needs of AMD fans. AMD has stated that Summit Ridge CPUs will mark their "re-entry" in the high-performance desktop market.

Yes, so Hans, overall the Zen design win, we have been engaged very early on with you know large OEM and cloud providers on the Zen design point and the platforms that would be useful for Zen. So we have closed our first design win, we are working you know very closely with these OEM partners to make sure that they bring up their platforms concurrently with our own design validation and testing. I think the main message is we are on track with the schedule that we previously discussed in terms of sampling this year. We will introduce first in desktop and so we are having conversations with some of the PC OEMs about getting their platforms ready for desktop and then we will go into enterprise server first full year in 2017.

We have secured several key design wins with global OEMs for our Zen based service CPU and believe we can rapidly reestablish our presence in the datacenter when we bring our new products to market in 2017. AMD via SeekingAlpha

The Summit Ridge FX CPUs family will be supported on the latest AM4 motherboards that will feature latest I/O compatibility and DDR4 memory support. The AM4 motherboards will be housing the latest Promontory PCH which will allow SATA Express/NVMe and USB 3.1 support.

The Bristol Ridge family will include the latest A-Series APUs and FX CPUs aimed at the desktop market. A quick glance at the technical features of both Carrizo and Bristol Ridge reveal no differences from both APU families. Both are based on a 3rd generation GCN architecture (GCN 1.2) which is the same version incorporated on the Fiji and Tonga GPUs. Both APU families have full support for DirectX 12, provide great audio, UVD, VCD, DCE features and support Dual Graphics, Panel Self Refresh, Dynamic Bezel Adjust along with the ability to run up to 3 simultaneous displays. Bristol Ridge APUs will feature up to four x86 Excavator cores with 2 MB of shared L2 cache. They will have support for HSA 1.0 and the latest DDR4 memory standard. The Excavator core ensures better IPC (Instruction per clock) versus previous generation cores.

Previously, AMD have priced their desktop APUs under the $200 range and it is expected to remain there. As for AM4 boards, it is highly likely that AMD will have a few budget options launched for Bristol Ridge APUs while the more performance focused parts will be set for launch with the FX series in Q4 2016.

The Bristol Ridge AM4 APU family will contain 8 SKUs, there’s no name defined for them but they will be using a new branding scheme, most probably A-Series 9000 as was revealed in a previous leak. There are seven SKUs that are based on a quad core design while one chip retains a dual core design. Clock speeds range from 2.5 to 3.6 GHz base and 2.8 to 4.0 GHz boost clocks across the processors listed. The graphics chips which will range from 256/384/512 stream processors (Radeon R7/R5/R3) will come with clock speeds ranging from 900 to 948 MHz. All chips will support DDR4 memory clocked at 2400 MHz (native speeds). Surprisngly, there are also few models without the graphics units which means they will either be Athlon or FX branded chips. The TDPs will be adjusted from 35 to 65W. More details can be seen in the table below: 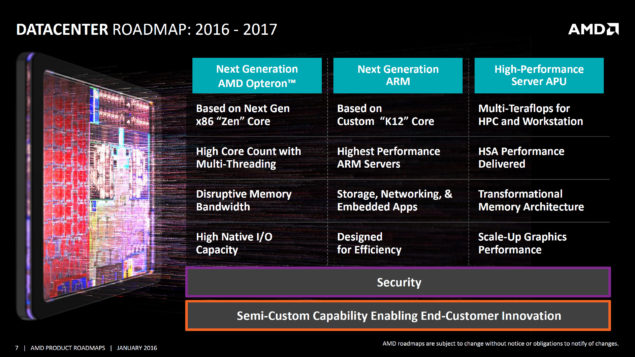 AMD also wants to establish their foots back in the server market which has long seen no action from the chip maker. With Zen, AMD will be launching new Opteron chips sometime in 2017 with huge  amount of cores and several technologies such as HBM2, DDR4 DRAMs and coherent interconnects to meet demands of the server and datacenter markets. In a question asked on the performance of AMD's upcoming Opteron processors, the company assured that they expect Zen powered chips will be capable enough to address the demands of 80% of the server market.

Okay and then as a follow up, what kind of performance point should we look at your initial Zen in the server space, is it Xeon E3 class type products or E5s or maybe you can help with some granularity there if you can?

Yes, we believe that we'll be able to address let's call it you know 80% of the server CPU market with our Zen class of products. So that's a very high end but you know really the meat of the market. AMD via SeekingAlpha

Both 2016 and 2017 will be crucial years for AMD as they launch some of their most anticipated products in the consumer and enterprise markets.