A day ago VR-Zone reported that AMD had cancelled their desktop Piledriver processors codenamed Vishera however latest reports suggest that Piledriver would launch but would be the last of performance CPU's from AMD.

OBR's the news breaker who acquired some internal documents of AMD which show that the company would discontinue its performance processors for desktop market after launch of Vishera. From them, AMD would focus more towards the development of its APU's (Accelerated Processing Units) which are doing quite well against competitor Intel.

AMD's performance offering such as Bulldozer didn't do well against Intel's Sandy Bridge and same is being said about the upcoming Piledriver architecture which doesn't has sufficient IPC improvements to tackle Haswell or even the recently launched Ivy Bridge processors. The last of performance processors we would see from AMD would be the FX 8200/8300 series after which the series would be discontinued. 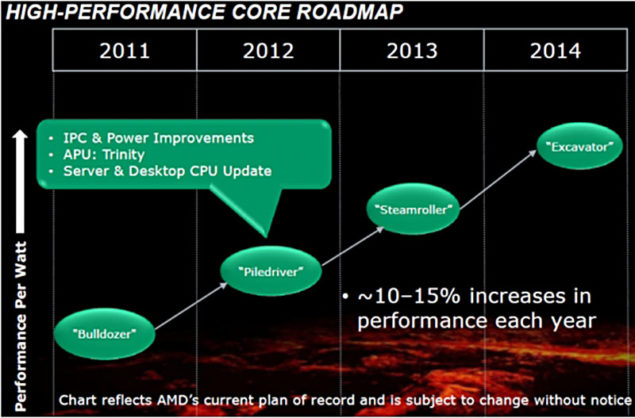 We still can't confirm how legitimate the source is since there has been no word on this by AMD themselves but for now it seems as if Steamroller and Excavator are just names to be remembered in the performance market, their core architecture would still be used in APU development. On AMD's APU's forefront, we would be looking at Trinity and later on Kaveri which would be the 3rd generation APU based on 28nm steamroller architecture featuring new HSA improvements and Sea Islands IGP chipsets, For more details, browse here.