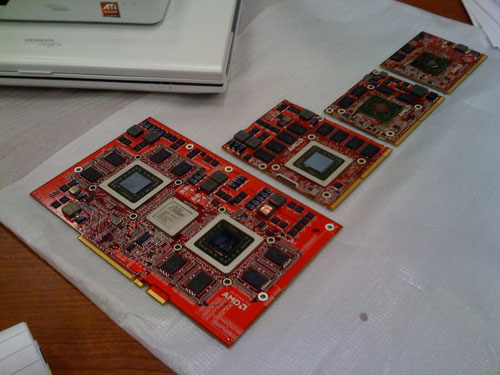 AMD has finally finished the release of its Top Order HD 6000 Series desktop discrete graphics processors (GPUs) and now information has leaked that its next line of GPU's which are going to be built on the 28 nanometer fabrication process are just around the corner as the codenames of the first GPU to carry the HD7000 series brand identifiers are notebook GPUs in the MXM 3.0 form-factor. Yep! AMD Mobility will be the first to carry the HD7000 Series tags and the first one will be its low end Fusion accelerated processing units with GPUs embedded. Detail's Below:

The Lineup starts with an Ultra High End Mobile GPU named "Wimbledon" which will feature a 256-bit wide high-speed GDDR5 memory interface, 2-4 GB of dedicated memory, and 65W TDP. This DirectX 11 M-GPU is said to be 25% faster than the "Blackcomb", the Mobility HD 6000 series flagship and is slated for Q2-2012. The other high end chip is the "Heathrow" mGPU, which has a 192-bit or 128-bit (selectable between variants) GDDR5 memory interface, 1-3 GB of dedicated memory, up to 45W TDP, and 30% higher performance compared to "Chelsea" and will come around Q4-2011. This could also mean that the Desktop variants of the HD7000 series will be available by the end of 2011.