AMD's FX-Vishera launch has been confirmed on 23rd October thanks to Xbitlabs. The FX-Vishera was already confirmed to launch sometime in October 2012 so now we have a much official date of AMD's new microprocessors which would replace the past years Zambezi CPUs.

Based on the Piledriver architecture and featuring upto 8 cores on the flagship FX-8350, the new Vishera would offer improved IPC performance over FX-Bulldozer which would reach EOL by Q4 2012. According to Xbitlabs source, 23rd would be the date of mass availability of the Vishera processors while reviews would hit the web first.

AMD also has Trinity planned for next week during 1st - 2nd October which you can see here. Pre-Order prices of these upcoming FX-Vishera processors were also revealed only a few days ago which show that the launch lineup would consist of four Piledriver chips - FX-8350, FX-8320, FX-6300 and FX-4300. Prices and details below:

Although the prices are higher than FX-8150 (Bulldozer Flagship CPU) but considering these are just pre-order prices, official prices would turn out a bit less. As far as benchmarks are concerned, you can find those on the flagship FX-8350 here. FX-Vishera would be compatible with the AM3+ socket motherboards featuring the 990FX chipset, the new motherboards are expected to show up during early October. 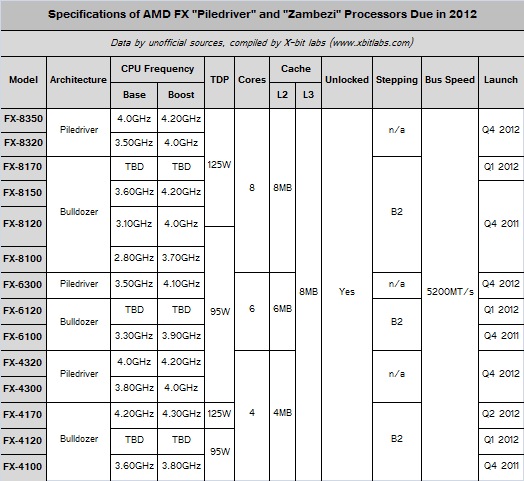 ASUS Announces Its TUF SABERTOOTH 990FX R3.0 For AMD Motherboard With A Massive Array Of Ports, Features And Dedicated Software