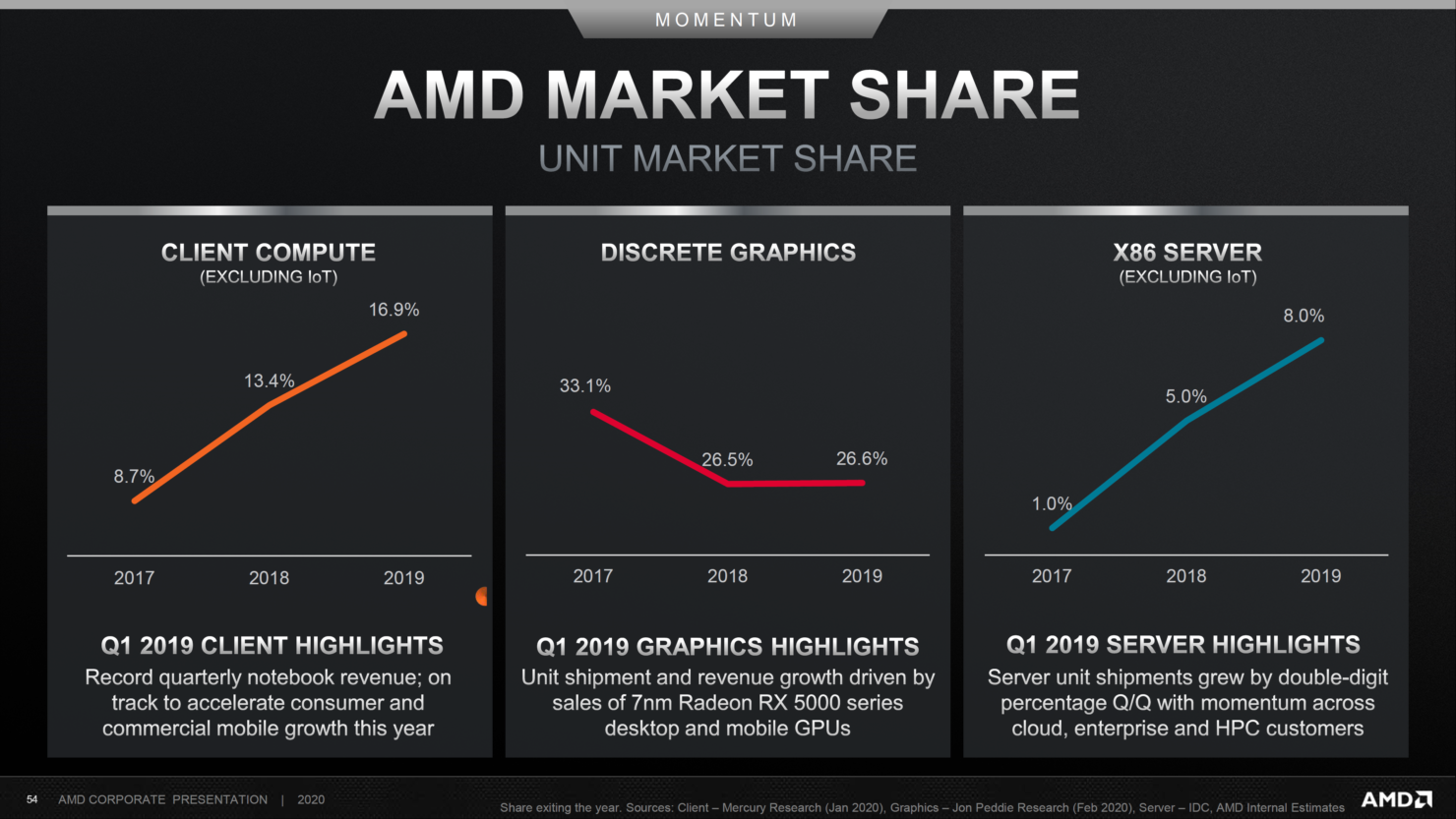 AMD has posted its latest Corporate Presentation in which the company has posted its market share statistics for 2019. It looks like AMD has reported massive gains in unit market share with server-side EPYC & client-side Ryzen CPUs based on their Zen core architectures.

Now, first of all, you might be wondering why we are sharing market statistics from the previous year when we have already seen newer figures. Indeed we have seen market share statistics from independent research firms such as Mercury Research but the ones AMD has reported in their new corporate presentation not only show the official figures but also show much higher share values than we have seen.

The statistics are based on several research firms including the aforementioned Mercury Research along with Jon Peddie Research for the graphics side and IDC for the server-side business. All share figures are reported till 2019 and that's something to keep in mind during the analysis of these statistics. There are several major launches that didn't take place until late 2019 and the first half of 2020 which don't amount in these statistics.

In addition to the market share statistics, AMD has also shared and reaffirmed that they stand by their existing roadmaps with Zen 3 (7nm) headed for the server and desktop market in EPYC Milan & Ryzen 4000 Vermeer CPUs in 2020, RDNA 2 (7nm) GPUs for gaming market headed this year too alongside 7nm cDNA 1.0 based Radeon Instinct HPC cards. Following are all the latest roadmaps from AMD:

Starting with the server-side, AMD has reported a share of 8%, almost double compared to 2018. The stats from Mercury Research highlighted a market share of 4.5% till Q4 2019 so this is where we see a large desperate between what research firms are claiming and what AMD's own internal estimates are showing. Considering that AMD's EPYC Rome CPUs based on 7nm Zen 2 architecture started seeing major traction in the later part of 2019 and start of 2020, it is wise to consider that AMD currently holds a double-digit market share which falls in line with what AMD had expected.

A double-digit market share in the early part of 2020 marks a major win for team red. If you recall back in June 2018, Intel's Ex-CEO, Brian Krzanich had stated that it's their job to not let AMD capture 15-20%. However, in less than three years, AMD has amassed a reasonable market share for server CPUs which is continuously growing. Intel's current SEO, Bob Swan, said during a recent interview that he is no longer interested in chasing a majority market share in the CPU side of things, as he believes that to be detrimental to the growth of the company.

AMD is also close to introducing its Zen 3 CPUs for its 3rd Gen EPYC Milan server lineup which are expected to take further foothold from Intel in the server segment. That along with increased CPU adoption for its EPYC Rome and next-gen EPYC chips in HPC, Data Center, and Supercomputing sectors will definitely help AMD cross its once historical and peak server market share of 26% that was all the way back in 2006.

Moving over to the client-side which covers the notebook and OEM market, AMD saw a 2x growth since the launch of its first Ryzen CPUs back in 2017. The current market share statistics show 16.9 percent market share for the company by January 2020. That falls in line with the 16.2% share from Q4 2019 but it's worth considering that AMD's Ryzen 4000 Renoir CPUs didn't start selling until the second quarter of 2020 and considering the number of units AMD has shipped for Renoir alone, we are bound to see a jump close to 20% by Q3 2020.

The client-side doesn't amount to desktop CPU sales which includes Ryzen AM4 and Threadripper TR4 socketed parts. Last we know, their share was hovering around 20% but considering that we have seen nothing but absolutely stellar amount of sales for AMD's Ryzen CPU family at several major global retailers with AMD's Ryzen CPUs accounting to 50% premium processors sales at the top global retailers, we are bound to see a major uplift in market share happening soon.

AMD is also getting ready to launch a new Ryzen 3000 refresh family in the coming month before moving to its last AM4 desktop CPU family, the Ryzen 4000 series codenamed Vermeer, in late 2020.

Lastly, we have the discrete graphics side which took a sharp turn towards the downside, hitting a 26.6% market share in 2019 compared to 33.1% from 2017. The share figures are from JPR and are reported until February 2020. AMD didn't launch any major cards in Q2 2020 and it's possible that the smaller number of notebooks featuring their Navi based discrete GPUs can increase this figure but a major market share growth for the discrete graphics segment isn't expected until late 2020 when AMD plans to introduce its Big Navi and RDNA 2 GPU based Radeon RX graphics card family which many consumers have been waiting to get their hands on for months. 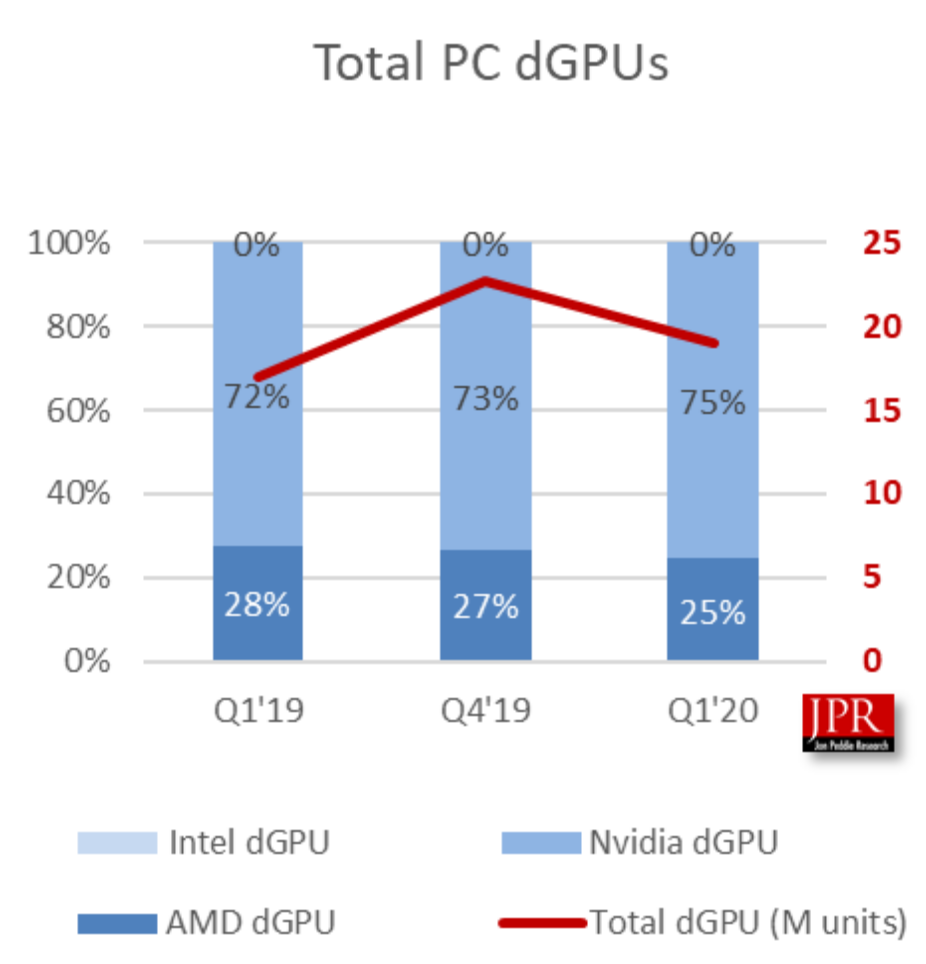 JPR's current figures put the current discrete GPU figures for AMD at 25% in Q1 2020 while NVIDIA holds the majority with 75% market share in the same segment. At the same time, the total volume of GPUs that AMD shipped increased dramatically, hitting 553 Million units by 2019.

A chart showcasing AMD's overall Radeon GPU shipments since 2013 which has increased to a total volume of 553 Million units in 2019. (Image Credits: Jon Peddie Research)

This is mainly due to the fact that AMD considers its APUs with Radeon GPUs in these figures too. Considering the amount of console and notebook APUs AMD has shipped, next-gen launches for the Xbox Series X, PlayStation 5, and next-gen Notebook APUs are further going to increase the volume of all Radeon GPU shipments.

AMD has emerged as a leader in CPU technology in a short span, owing largely to its Zen core architecture which was developed by legendary chip architect Jim Keller. From this point onward, AMD has set out a strong roadmap for both, its CPU & GPU technologies, showing its leadership across the board catering to the high-performance computing segment and general consumers. We are expected to see AMD's CPU side continue to grow for years to come if they keep up with existing pace.