In its recent earnings call, AMD's CEO, Dr.Lisa Su, stated that Ryzen CPUs now accounts for 50% of the premium processors sales globally. The figure is based on statistics from various top etailers around the globe and for months now, we have been seeing Ryzen CPUs dominating the top sales charts due to stellar performance, efficiency, and value.

There's no doubt that Intel has been wiped off several major retailers since the arrival of 3rd Gen Ryzen CPUs. We have seen AMD CPUs not only topping the sales and recommended charts but the same CPUs have accounted for almost 90% of total CPU sales at major retailers. Lisa states that the Ryzen CPUs account for a 50% share of premium processor sales at several top-tier retailers across the globe.

In desktop, overall demand for our latest Ryzen 3000 and prior generation Ryzen 2000 processor families was strong, both of which continue to top retailer best seller lists and have more than 50% share of premium processor sales at many top global e-tailers. via AMD's Q1 2020 Earnings Call Transcript at The Motley Fool

The 3rd Generation Ryzen CPUs also currently make up the 9 of the top ten best selling CPUs over at Amazon. The Ryzen 5 3600 stays as the top-selling chip at its current price of $162 US which is very impressive, followed by the 8 core Ryzen 7 3700X. Even the Ryzen 9 3900X retains 4th position which is pretty amazing considering this is a top-tier $400 US+ processor. 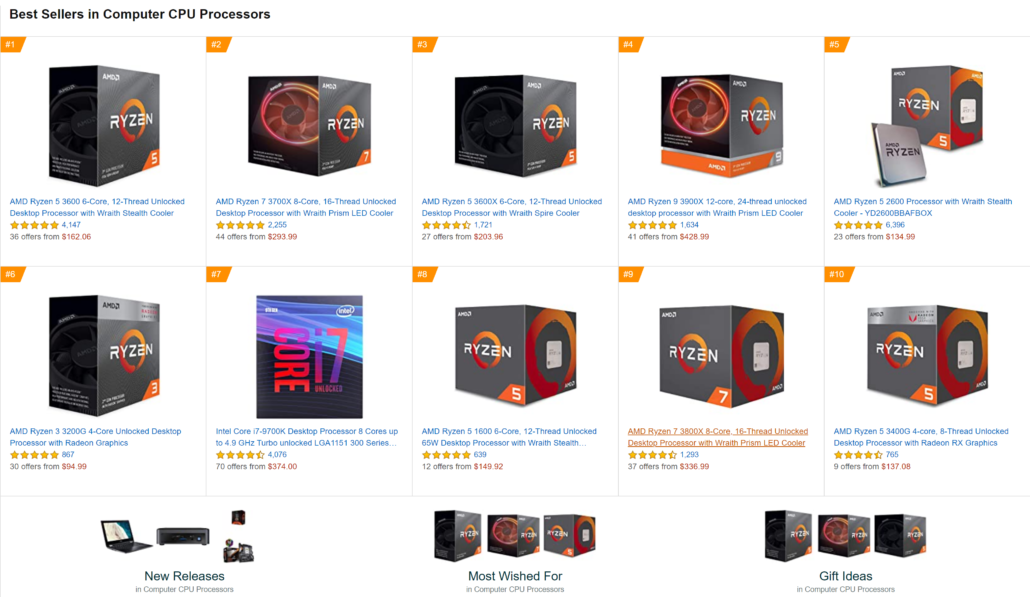 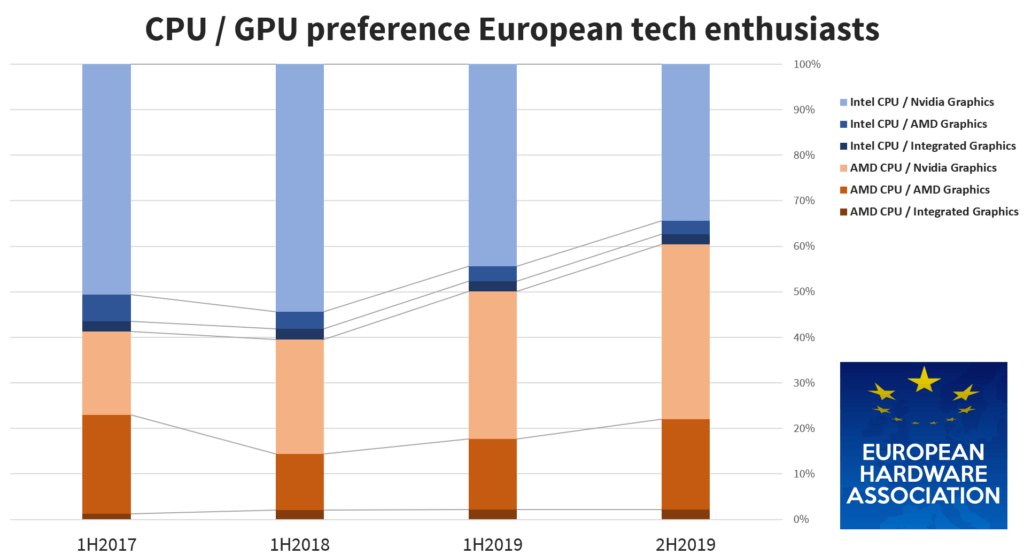 The European Hardware Association also revealed that around 60% of tech enthusiasts now prefer an AMD CPU over an Intel. Also, the vast majority of AMD users prefer NVIDIA graphics cards over AMD Radeon offerings. This is mainly due to high-end performance residing with team green right now while AMD has yet to release an enthusiast card. More recently, Mind factory, the largest tech retailer based in Germany, announced that it had sold 50,000 Ryzen 5 3600 CPUs since the 6 core chip launched. 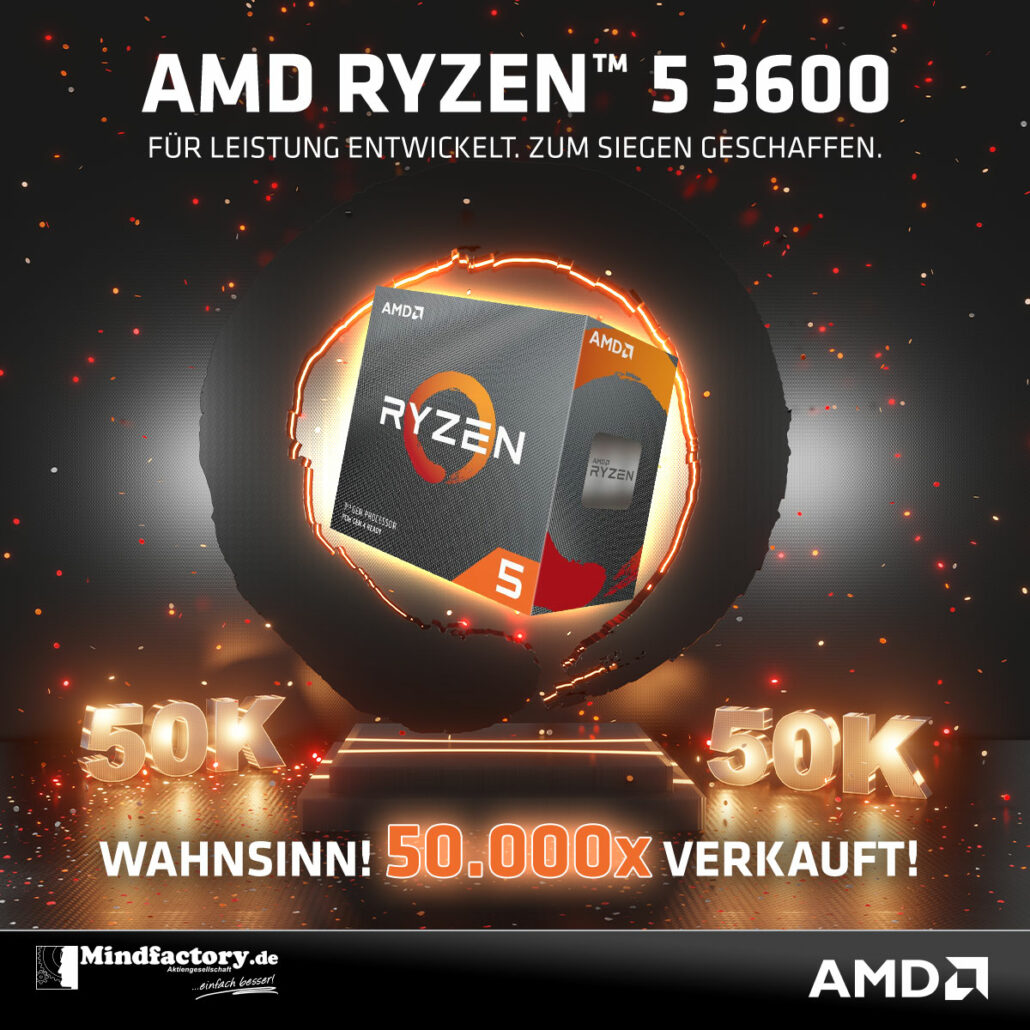 Mind Factory's own sales figures for the rest of the AMD lineup have been consistently strong since the arrival of 3rd Gen Ryzen CPUs. Based on the statistics from Ingebor which cover the month of March, AMD CPUs accounted for 88% sales & 84% revenue for the retailer versus 12% sales & 16% revenue for Intel CPUs. Now, the last week of April 2020 showed even better results with AMD 3rd Gen CPUs accounting for a massive 89% sales and 85% revenue share versus Intel's 10% sales and 15% revenue share. The higher number of AMD CPU sales also affected the sales share of AMD's chipset based motherboards which pushed 2660 units versus Intel's 375 units.

Lastly, we have the latest CPU market share results from CPUbenchmark which account for the total operational CPUs across the globe. AMD is slowly but steadily eating up Intel's CPU market share, getting closer and closer to the 50-50 share split mark. A 50-50 share split would be a huge milestone for AMD's Ryzen CPUs since the launch back in 2017. 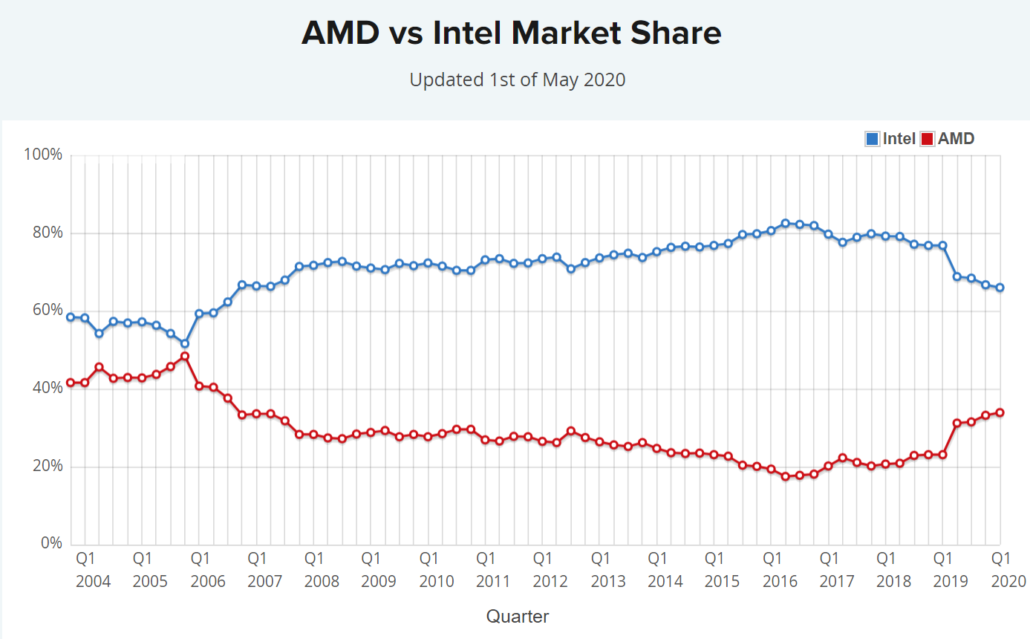 With the arrival of Zen 3 based Ryzen 4000 Desktop CPUs confirmed for later this year, we will see even more discounts on the existing Ryzen 3rd Gen and 2nd Gen parts and considering the amount of performance they offer, they will be selling like hotcakes, pushing AMD's CPU market share even higher.