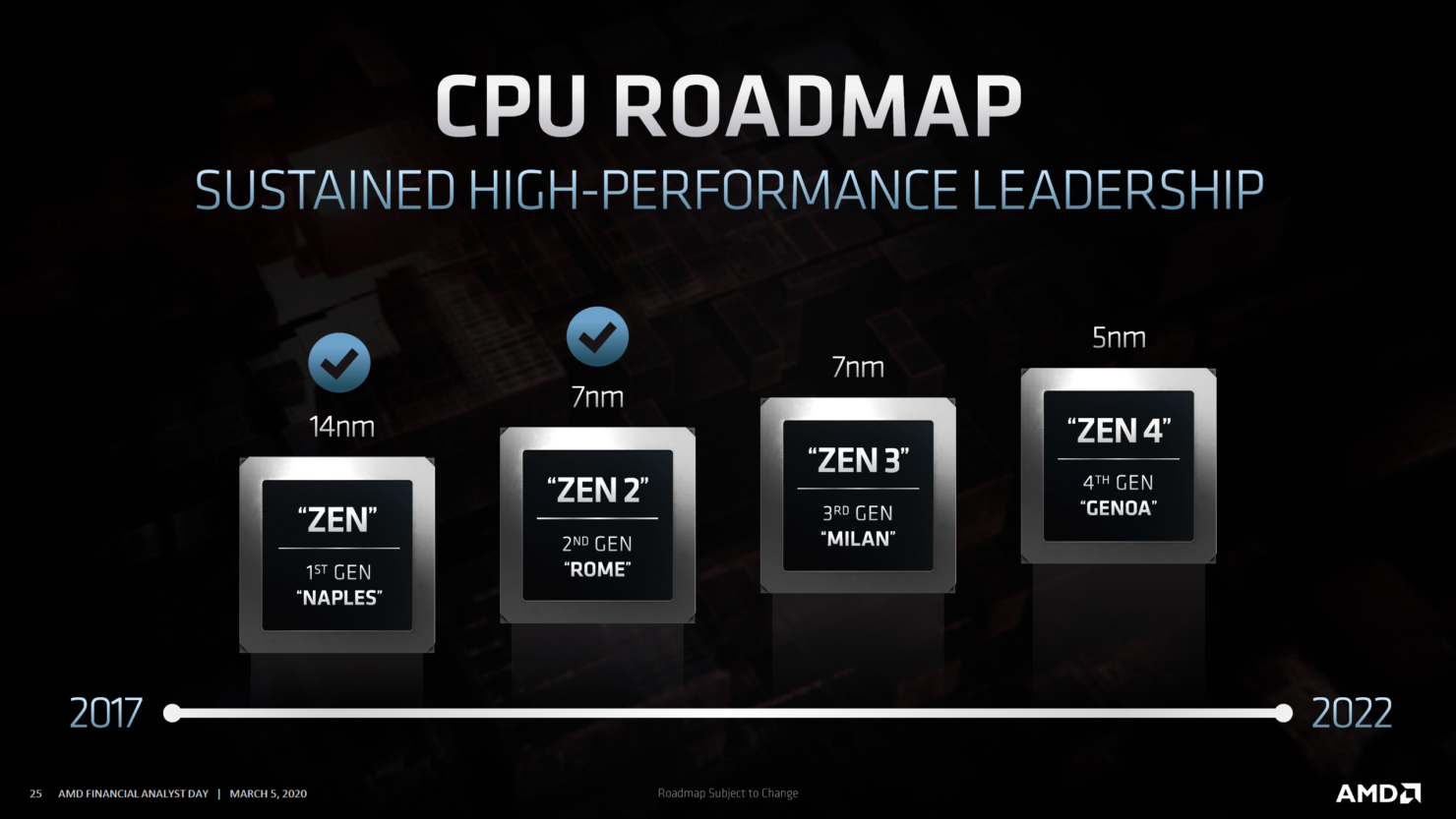 During its Financial Analyst Day, AMD presented it's latest CPU roadmaps and confirmed that the next-generation Zen 3 based Ryzen & EPYC Milan CPUs are arriving later this year. Based on a 7nm process node, the new Zen 3 based CPU families are going to deliver a huge leap in performance per watt and IPC gains.

Once again, most of the details are something that we already knew and AMD just reaffirmed those. According to the latest roadmap, AMD will be launching its Zen 3 CPU architecture this year in two key product families, the 4th Generation Ryzen 4000 series desktop processors and the 3rd Generation EPYC Milan server processors.

AMD has listed Zen 3 as 7nm (previously referred to as 7nm+) since it caused confusion as many thought it was AMD referring to TSMC's 7nm EUV node but the company has stated that they've not unveiled the process node officially as of yet and will do so at a later date. Coming to the new roadmap, we see Zen 3 (7nm) listed as a 2020 part with Zen 4 (5nm) replacing in in 2021. Since the Zen 3 parts are shipping in late 2020, it is highly likely that Zen 4 chips would follow suit and could hit the market by end of 2021 or even early 2022.

AMD has so far confirmed themselves that Zen 3 brings a brand new CPU architecture which helps deliver significant IPC gains, faster clocks and even higher core counts than before. Some rumors have even pointed to a 17% increase in IPC and a 50% increase in Zen 3's floating-point operations along with a major cache redesign.

The AMD Ryzen 3000 CPUs based on the Zen 2 architecture have seen an incredible response by the PC industry with a total of 260+ Million Zen cores being shipped to date and the bar keeps on rising. It looks like the Zen 3 launch is going to bring even more momentum to AMD's CPU segment and the overall market share.

Moving on to the server-side of things, AMD confirmed that its 3rd Generation EPYC Milan lineup will be shipping in late 2020. The new lineup is expected to continue performance leadership in the server segment.

The AMD EPYC Milan processors would succeed the current EPYC Rome lineup. The fundamental change for the EPYC Milan lineup would be the new Zen 3 core architecture which will be based upon an advanced 7nm process node. From what we know and what AMD has officially shown, the AMD Zen 3 based EPYC Milan processors would focus primarily on performance per watt enhancements but that doesn't mean we won't be looking at core updates.

In a recent slide, AMD showed their Zen 3 based 7nm processors offering better performance per watt than Intel's 10nm Ice Lake-SP Xeon chips. As for the new features, other than featuring its Zen 3 core design, Milan would offer socket compatibility with SP3 platforms, would feature support for DDR4 memory, PCIe 4.0 interface and is stated to offer 64 cores and 2x the threads (128 threads). This may put the recent rumors of Milan introducing 4-way SMT to rest but it may be possible that AMD offers a custom-design that offers more cores and more threads per core. The chips will have a TDP rated at 120-225W which is similar to existing Rome parts.

Summing everything up for EPYC Milan, we are looking at the following main features:

Genoa CPUs would be featured in the El Capitan supercomputer which is expected to deliver over 2 Exaflops of Compute power when it becomes operational in 2023. It would also utilize the next-generation CDNA2 GPUs which are solely designed for HPC workloads. The new EPYC lineup would be outfitted with the 3rd Generation Infinity Fabric architecture which you can find more details on over here.