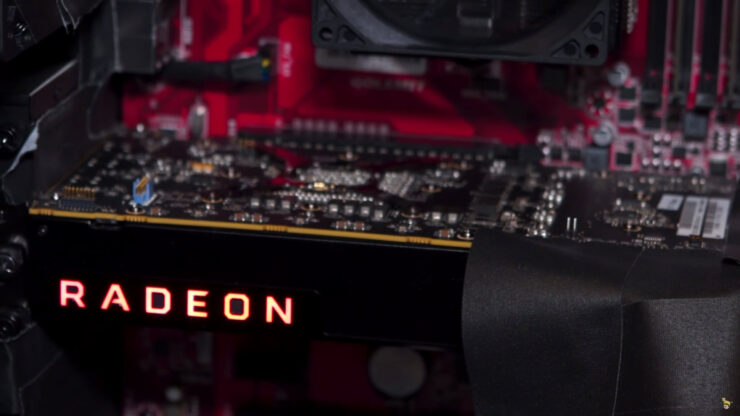 In an interview with AMD's head of Radeon Technologies Group, Raja Koduri, it was revealed that the impressive 4K/60FPS+ DOOM demo that the company showcased was in fact running on the company's brand new high-end Vega 10 GPU, rather than the smaller mid-range Vega 11 chip. Not only that, but the Vega 10 powered Radeon graphics card engineering sample unit that was used in the demo was later pictured.

The card did indeed look like a high-end part. It was quite long, noticeably longer than the RX 480, and boasted a bold LED-lit Radeon emblem. Raja was later pressed to reveal whether the demo unit was boasting the full Vega 10 configuration or a cut-down variant of Vega 10 but he wouldn't budge.

Digging deeper into AMD's Vega 10 and Ryzen announcements PCWorld's Gordon Mah Ung and Brad Chacos sat down with Raja Koduri, well actually they stood up, and chatted away for about 40 minutes. One very interesting question that came up during the interview, which you can find here, was whether Vega 10 would still "beat the pants off the GTX 1080" if the DOOM demo was ran on OpenGL instead of the more efficient Vulkan.

Brad Chacos - Senior Editor,PC World
The only demo you've let people play so far is DOOM running at 4K Ultra. I've played it, it runs awesome it's a great game. It can hit up to 85 FPS, but typically it's running 60-70 FPS at 4K Ultra everything cranked. Which beats the pants off the GTX 1080, but that's running Vulkan. Would it still beat the pants of the HTX 1080 if it was running DX11?

Raja Koduri - Chief Architect Radeon Technologies Group, AMD
I think it would. Because at that resolution things are more GPU bound, less CPU bound. That's one factor. But let me not say that too confidently because the DOOM developer had done some console optimizations like line assembly shaders and shader intrinsics and I don't think they are available in OpenGL. That's not a fundamental OpenGL issue, it's just that  we didn't invest into putting all the extensions back into OpenGL which we could have [done]. I only have a finite number of engineers so they're just focused on Vulkan.

This is an important question because low level APIs like DirectX 12 and Vulkan have shown a clear tendency to favor AMD's GCN architecture over NVIDIA's Pascal and Maxwell. While older highly abstracted APIs such as OpenGL and DirectX 11 continue to favor NVIDIA's GPUs. If Vega 10 can maintain its lead over the GTX 1080 in OpenGL this would bode well for the GPU's performance in DirectX 11 titles as well. The answer to the question was yes, Vega 10 should still outperform the GTX 1080 had OpenGL been chosen over Vulkan.

There was an important caveat to Raja's answer however. He said that Vega 10 should in fact beat the GTX 1080 running at the same 4K resolution. Although, at lower resolutions where the game is more CPU bound there would be less of a performance differential between the two. Speaking of low level APIs, Raja confirmed that 2017 is going to be a much bigger year than 2016 was for DirectX 12 and Vulkan titles. The number of DirectX 12 and Vulkan game releases this year is expected to be exponentially higher than last year. Something that Raja was clearly very excited about.

Before we jump to the subject of overclocking on Vega 10 we should first talk a little bit about what Vega 10's regular clock speeds look like. We know that Vega 10 has been designed to run at higher clock speeds. And thanks to an earlier leak, it's now been confirmed that Vega 10 has a total of 64 compute units and 4096 GCN stream processors. Additionally, thanks to AMD's MI25 announcement we know that the GPU is rated at 12.5 FP32 TFLOPS, at least in its passively cooled configuration.

Vega 10's 1528MHz clock speed is already considerably higher than the RX 480's 1266MHz, 20% higher to be exact. So there's already a huge differential here in what Vega can achieve compared to Polaris in terms of clock speeds. When Raja was asked about what AMD expects out of Vega 10 in terms of overclocking he said that RTG engineers are still figuring that out themselves and should have more information in a couple of weeks time.

When our own Keith May sat down with Scott Wasson, technical marketing manager at RTG, he talked about Vega 10's high clock speed potential with a huge grin on his face but would not give us any specific details. Overclocking potential is one of those things that's incredibly hard to predict early on, so definitely expect more info as we get closer to Vega's launch. Which is looking like it's going to be coming sooner rather than later. Vega GPUs have been used in public demos since December and AMD already has working physical graphics card samples that it's showing off publicly. All of which bode well for Vega's maturity. Although don't expect Vega to land anytime sooner than Q2 2017.

What has been confirmed so far is that AMD is working on two Vega GPUs. The first chip is the high-end ~530mm² Vega 10 that has been used in all of AMD's demos to date, including the Star Wars Battlefront demo that was showcased back in December at the "New Horizon" press event. The second is Vega 11, a smaller mid-range chip that's expected to slot in between the RX 480 and Vega 10. We know very little about Vega 11 other than it will likely feature HBM2 technology like its older brother and launch sometime in the middle of the year.

In terms of compute the GPU has 64 NCUs -- Next Generation Compute Units -- consisting of a total of 4096 stream processors. In terms of power and cooling the gaming variant of Vega 10 is actively cooled while the professional MI25 variant is passively cooled. So you should expect gaming-focused Radeon Vega graphics cards to feature even higher clock speeds than 1.5GHz. By how much exactly remains to be seen. Finally, the GPU itself is rated at around 225W in its full 64 NCU configuration, whilst an entire Vega 10 powered graphics card is rated at <300W.