Nvidia's CES Press Conference went by without any reports or details about its upcoming 28NM Kepler Based Graphic Cards however OBR has posted some details of the GeForce GK-104 chip over at his blog. 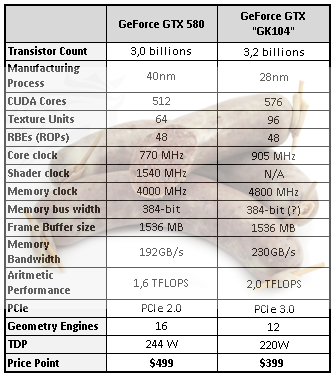 Nvidia's Kepler Series would drop the "Hot Clocks", Core Clock would be set at 905Mhz and 4800Mhz for the memory (384-bit). The card would feature a memory buffer of 1536Mb and total Bandwidth would equal around 230Gb/s, A total of 2.0 TFLOPS of power is expected from the GPU. Since Kepler features a smaller die, Total TDP would be lower than GTX580's 244W at 220W. The Price of the GPU is expected around $399.

The performance of the GK-104 chip is said to be 10-15% faster than the GTX580. OBR also mentions at the end of his post that the Launch of the new cards is sooner than expected. Reports from Fudzilla suggest that the new cards would launch in Q1 2012 however no official reports have been released. More info on Kepler from Nvidia below: