A Slide unveiling performance estimates of NVIDIA's Next Generation Kepler based 28nm GPU has been exposed. The slide shows that Nvidia will brand the Kepler based GPU's as Geforce 700 Series instead of Geforce 600 Series and pits the upcoming 28nm GK-100 based GTX 780 Flagship card against the current gen flagship GTX 580 GPU.

The GK-100 based GeForce GTX 780 would be NVIDIA's Next Flagship Single core card based on the Kepler 28nm process. feature a total f 1024 Shaders (Cuda Cores), 128 texture units (TMUs), 64 ROP’s and a 512-bit GDDR5 Memory interface. The specs are impressive and we reported in our previous post here that it would outperform GTX 590. Well that seems true as seen in the slide below:

All the Benchmarks were performed on a res of 2560 x 1600, Win 7 64-bit OS, R297 series graphics driver, Max Settings in game with AA/AF turned On and the test setup included the Core i7 3960X Sandy Bridge-E Processor. 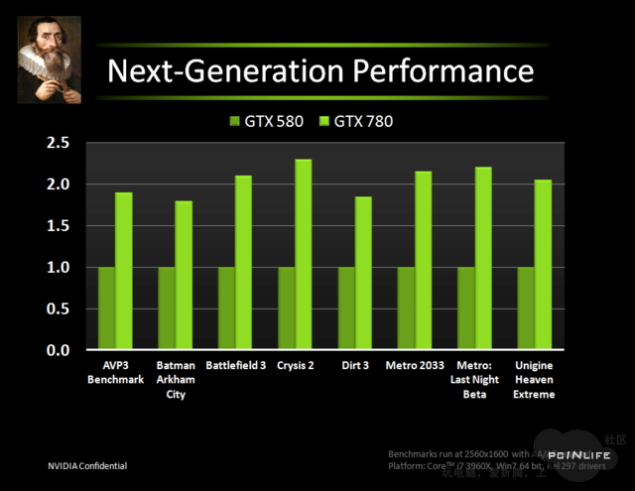 Performance was tested in a total of 8 games and Kepler seriously obliterated GTX 580 in every one of them. The chart shows a performance increase ranging from 70% - 130% which is some serious improvement. The GTX 780 would surely be a card worth the wait when it arrives in Q2 2012 but the prices would be higher then the AMD Counterparts which are now expected to release on 22nd December 2011. Also where did the GTX600 Series go? Would Nvidia abandon it like GeForce 300 Series and make it a Mobille only segment.

For more information on NVIDIA's Kepler GPU's, Do check out the following links: