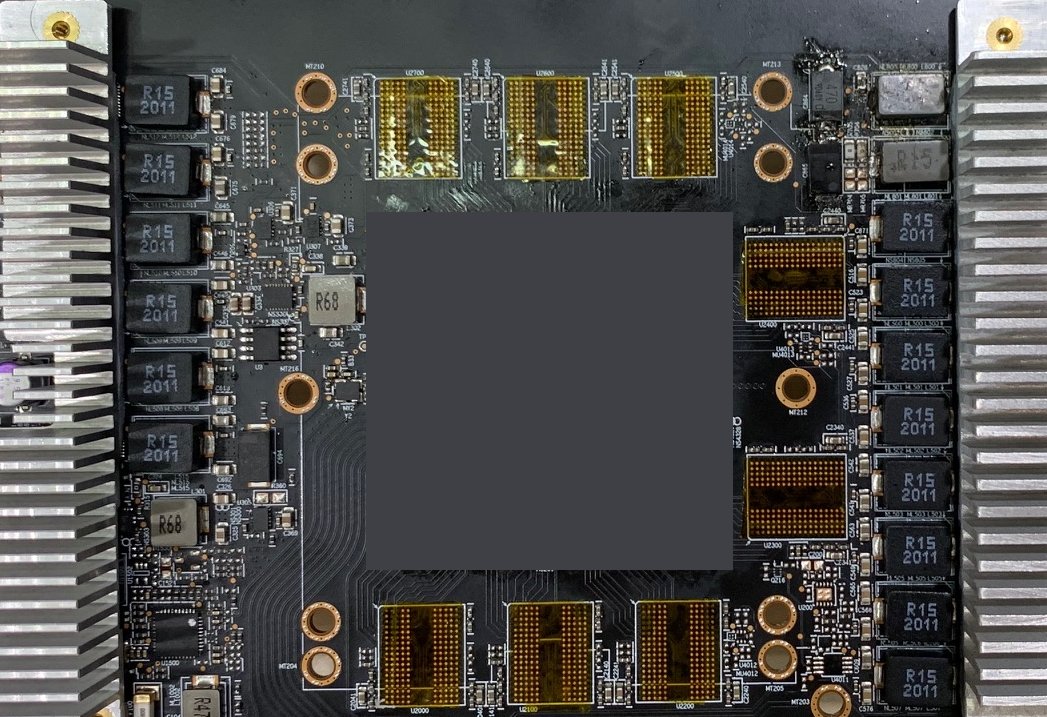 An alleged PCB of AMD's upcoming Radeon RX 6000 "Big Navi" graphics card has leaked out which confirms some recent reports that we have heard. The picture was leaked by Twitter user, EB-18, & shows what seems to be an engineering board featuring the RDNA 2 powered Big Navi GPU.

Compared to the previously leaked engineering board, the latest Radeon RX 6000 series graphics card PCB gives us a better view of what to expect from AMD's Big Navi "Navi 21" class products. It will still be based on an engineering board so the final design could be vastly different than what we are looking at here.

So coming to the PCB specs, the GPU has been blacked out for unknown reasons but there are other interesting parts to focus on. The engineering board features a 16 phase delivery and two power connectors (8-Pin) can be seen. The VRMs are featured beneath two large aluminum fin-based heatsinks which are definitely not going to be included in the final design. The card comes with at least four display outputs which include two DisplayPort, a single HDMI port, and a USB Type-C VirtualLink connector which was something that earlier rumors had indicated.

There's also a BIOS switch that can be seen on the top of the PCB which is interesting. This could either be a reference engineering board or a custom AIB developed engineering board. My guess is that AIBs have started evaluating custom board designs and this is one of the first samples that we are looking at. Surrounding the GPU is 8 spots for GDDR6 memory. This represents a 256-bit bus interface. Now the previously leaked PCB showed us the backside of the card and we didn't spot any GDDR6 chips on the back which should indicate that the card is using denser DRAM modules rather than going for dual-sided memory.

In addition to the PCB leak, CapFrameX has reported that AMD's Big Navi GPU "Navi 21" delivers a score of 11,500 points in the 3DMark Firestrike Ultra benchmark. There are no details on which Big Navi SKU is the user referring to as there are three variants, the XL, XT, and XTX. Regardless, a GPU score that high puts the Big Navi GPU at around 8.5% faster than the GeForce RTX 3080 which is super impressive. If these numbers are for the reference card and the "XT" variant than there's no doubt that AMD has all eyes to steal the performance crown from even NVIDIA's flagship graphics offering, the GeForce RTX 3090.