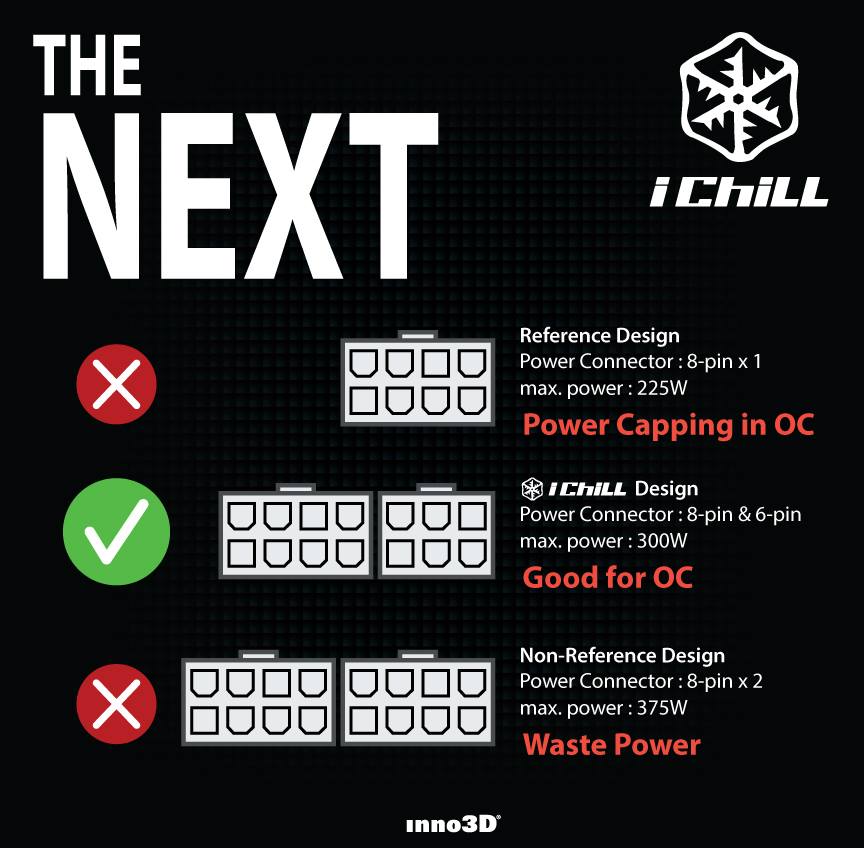 Inno3D was adding dual 8-pin power connectors to its GPUs for the longest time, and now they suddenly believe that graphic cards featuring such a configuration will be wasting power?

According to a forum post on VideoCardz, Inno3D has stated the following:

With the lithography of GPUs decreasing, power consumption will naturally decrease with upcoming iteration of GPUs. In fact, in no time could we actually see desktop-class graphic chips being incorporated in gaming notebooks because of their efficiency. However, when manufacturers release military-grade products with the intent of overclocking them, the extra pins will obviously be a welcome feature when you want to increase those frequencies to squeeze every bit of performance from the latest video game titles.

Inno3D is under the impression that an 8+6pin configuration is ideal for overclocking purposes and that adding more will just be wasting power. In a way, Inno3D’s message could be relatable to the future, since there will come a point when GPUs become so efficient that they probably would not need more than a single auxiliary power connector to provide them with more juice.

For now, saying that a dual 8-pin power connector is just wasting power is something that we will not agree on, as more manufacturers continue to incorporate such a power delivery setup to their own GPUs. Just recently, the company teased the custom cooler of its GeForce GTX 1080 and GTX 1070.

The iChiLL cooler is not going to remain limited to a single model. There are going to be a total of two models; the X3 model (featuring 3 fans), which is incorporated with Scythe fan blades for silent operation and possess the ability to pull in more air for better cooling performance. Apart from this, Inno3D will also be rolling out the X4 model (featuring 4 fans). This model will sport 15 turbine blades for even better extra cooling performance operation.

Both of these graphic cards are going to feature an 8+6pin power connector configuration so it does not feel like the company is ever going to adopt the dual 8-pin power connector any longer. Do you guys believe that Inno3D is right about its statement? Let us know your thoughts right away.