With CES in Vegas being the center of several new laptop and notebook launches, we almost forgot about Apple, whose impressively thin notebooks have become somewhat of an industry standard. While its an obvious fact that several of the Cupertino manufacturer's products can be classified to be 'over-priced' in some segments, Apple's design and construction of its notebooks still remains as flawless as ever. And looks like the company's looking to make it stay that way, atleast according to Apple insiders anyways. Several folks familiar with Apple's internal prototypes have spoken up and if what they say is true, then the next MacBook Air will be like nothing you've thought of before. 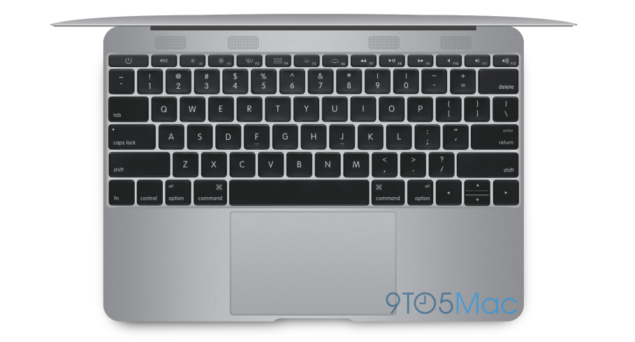 But that's far from being the only detail that has been changed on the 12 inch MacBook Air. The keyboard features several significant design changes and now ends up stretching across the entirety of the notebook. In addition, Apple has also made the space between individual keys as thin as possible in order to minimize the space covered by them. This is better illustrated in the images below. Function keys at the top and the arrow keys at the right also receive changes that end up enhancing space utilization. Oh and all those rumors about a buttonless trackpad? Looks like they might be true after all, if 9to5Mac's Mark Gurman is to be believed.

The thickness of the laptop is reduced by sticking to the philosophy of bare minimalism when it comes to its overall design. Not only will the 12 inch MacBook Air end up having the fewest amount of ports on any Apple notebook so far, but it will also be one of the first notebooks to come featuring reversible Type-C USB connectors, showcased earlier at the CES in Las Vegas. The left side of the notebook features a headphone jack and two microphones for noise cancelling. The right side sees only a single Type-C USB connector meaning that Apple's choosing to ditch its very own Thunderbolt and MagSafe charging standards for the sake of a re-design.

Where does that leave users wishing to connect more than one device to their MacBook? Well it won't be any less Apple to introduce an accessory that enables you to do that. And before we forget, fanless design is also another feature that seems to have made it to the 12 inch MacBook Air. See the speakers on top of the keyboard in the render above? Yes, they'll be functioning as ventilation ports for the notebook as well. After all, even the most thinnest of notebooks has to breathe somehow. So stay tuned folks, looks like Apple's looking to go really really big when it comes to its next MacBook Air. We'll keep you updated and let us know what you think in the comments section in the meantime.