In a move that was being anticipated by many, Apple's finally, introduced the much rumored about 12 inch MacBook Air at today's Spring Forward event. As being speculated by countless earlier leaks and posts, the 12 inch MacBook Air features a significant redesign of the notebook, with a particular focus paid around the device's keyboard, and other touch inputs. 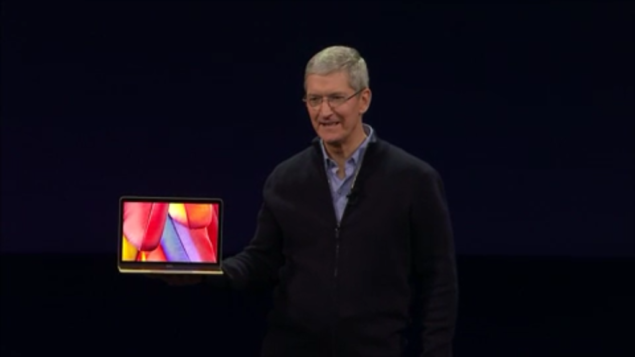 The Much Rumored, Much Hyped About 12 Inch MacBook Air Is Here - And It Features Several Design Overhauls

Starting from the processor, Apple's latest thinnest MacBook ever will be featuring Intel's Core M Processor on board. The notebook will also be completely fanless adding towards not only adding to the device's thinness, but also making it one of the quietest notebooks that you'll ever own. But that's not where the 12 Inch MacBook Air's redesign rests. Apple's paid a particular focus towards the keyboard, with an all new Butterfly mechanism. This ends up introducing greater balance, stability and illumination, with each key being lit by a single LED. Despite its reduced design, Apple claims that each key now has 17% larger area when compared to previous versions.

The Mac logic board contributes to the overall thinness and is the thinnest logic board designed by Apple, according to the company's claims. The 12 Inch MacBook Air also has a greatly redesigned touchpad which includes a greater focus on force touch, with Haptic Touch built right into the trackpad. With the all new trackpad, you'll be receiving outputs directly through your trackpad. Not only this, its also equipped with force sensors on board, that'll be able to detect the amount of pressure that you're applying on your trackpad. Force Touch launched with the trackpad allows for a host of new features that can be used.

With space minimization come needs to reduce almost everything on the device that you're designing. Apple's done this as expected by reducing the number of external ports available on the notebook. Or by reduce, we mean the 12 inch MacBook Air now only has a single connector port. But if you're wondering whether that ends up sacrificing connectivity, don't be. The single connector on the MacBook will be able to support USB, Power, HDMI, VGA, and Display. Coming towards the battery design on the device, the MacBook now features a custom designed battery, which provides up to 35% increased battery cell capacity. This leads to 10 hours of battery life for the notebook.

But the 12 Inch MacBook Air wont be complete without its display resolution. The notebook has a screen resolution of 2304 x 1440, which is high, even for a notebook. It weighs in at a mere 2 pounds and will be available starting April 10 with two variants costing $1299 and $1599 and separated by processor frequency and storage capacity. Thats all for right now folks. Stay tuned for more and let us know what you think of Apple's latest notebook launch.