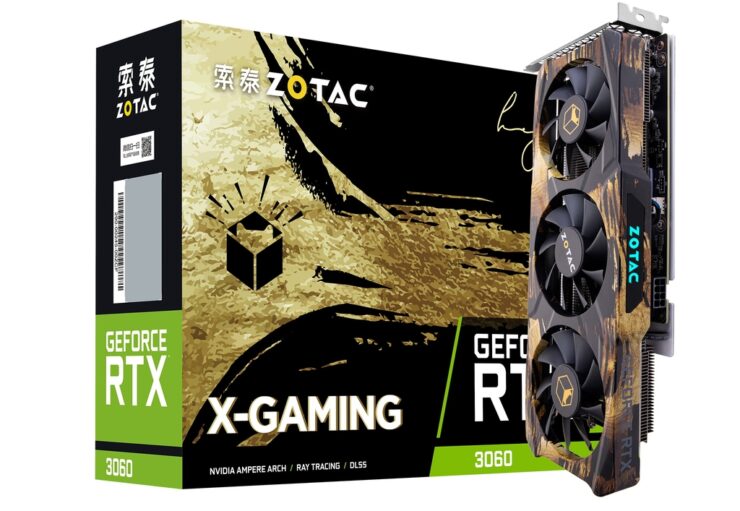 Chinese manufacturer ZOTAC has created an custom GeForce RTX 3060 X-GAMING GPU for Chinese online retailer T-Mall. The GeForce RTX 3060 12G X-GAMING GOC H-Box is one of many new options for DIY PC enthusiasts for creators and gamers. Computer hardware manufacturers are not only starting to make slight alterations to GPUs, fans, and other computer accessories as far as features, but also offer an aesthetic look to each product.

The GeForce RTX 3060 12G X-GAMING GOC H-Box sports a gold flaked appearance, appealing to fans of first-person shooters and military simulation games. Printed on the three cooling fans are ZOTAC's logo positioned on the middle fan and what appears to be a silhouetted cat hiding in a box on the left and right fans. The silhouette bears a striking resemblance to the mascot of T-Mall's brand.

VideoCardz states that the specifications of the GPU are similar to a previous retro inspired RTX 3060 X-GAMING GPU, such as a single 8-pin power connector, standard display connection, and dual-slot design. There is a new LHR (lite hash rate) and a slight modification to it's boost performance from it's previous model — a less than one percent increase from 1770 MHz to 1792 MHz.

Hassan Mujtaba, Senior Hardware Editor at Wccftech, mentioned in November of last year about NVIDIA increasing production for its GeForce RTX 3060 graphic cards, so it is great to see other manufacturers producing custom computer hardware at a time when consumers are looking to increase their productivity or gaming experiences.