A few days back, Nintendo of America's Reggie Fils-Aime talked about the release date of the Zelda Breath Of The Wild The Champions’ Ballad DLC, which is apparently going to be announced shortly. Many speculated that the DLC pack will release on November 23rd alongside the new Zelda Breath Of The Wild amiibo figures, and something else that's been discovered today seems to point to this date as the release date of the DLC.

As revealed on the Zelda Breath Of The Wild Official Japanese website, a download card including the game's Expansion Pass is going to be released in Japan by select retailers on November 23rd. As the first DLC is already out, it would make sense for Nintendo to release the card together with the game's final DLC. 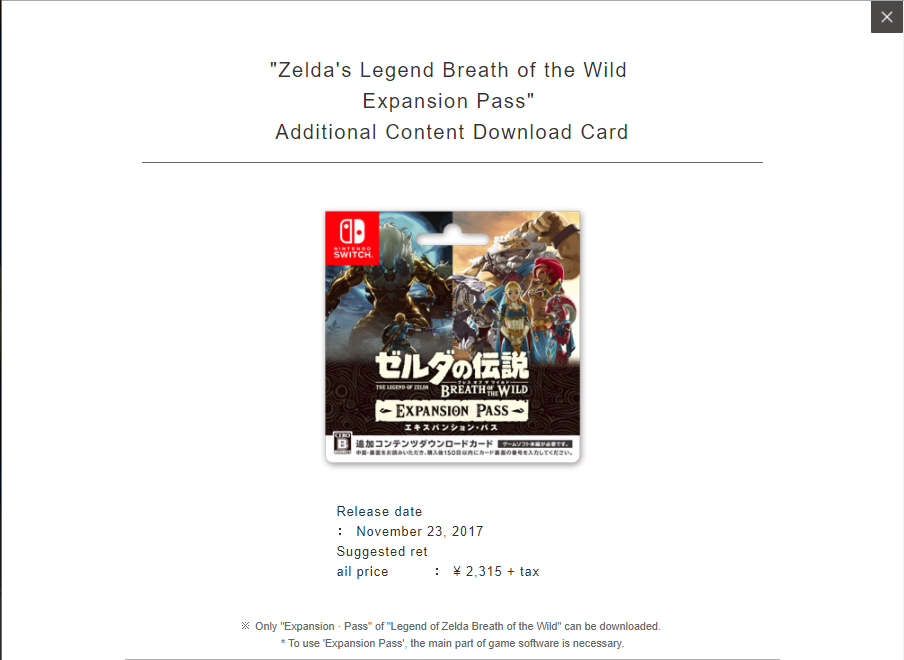 The first Zelda Breath Of The Wild DLC pack, called The Master Trials, includes plenty of additional content that expand the experience. By itself, however, it's not really worth the price of the Expansion Pass.

But, the big question is, as a package, is the Master Trials worth the price of the Expansion Pass? Well, no. It might not even be worth half the price, honestly. As far as the first of the two DLC packages goes, it’s hard to feel truly excited by it – yes, there’s some fantastic additions, but they are, essentially, more of what we have already seen in the main game. The second DLC pack, The Champion’s Ballad, looks set to make the Expansion Pass more than worth it, but until then, only those who really want more content in Breath of the Wild should bother with The Master Trials DLC.

Zelda Breath Of The Wild is now out in all regions on Nintendo Switch and Wii U.