We've seen quite a few Sony Xperia Z3 leaks up till now. The information has been quite diverse, ranging from alleged specifications of the device to it's alleged exterior. By the looks of things, the Sony Xperia Z3 just might be about to enter mass production. In ddition to this, the Xperia Z3 is expected to be a minor upgrade over it's predecessor. It is to come with Snapdragon 804 clocked at 2.4 GHz with 3 GB of RAM and 5.5" display of 1920 x 1080p resolution. Well, after the Xperia Z3, we're also looking at pictures that claim to show the Sony Xperia Z3 Compact. 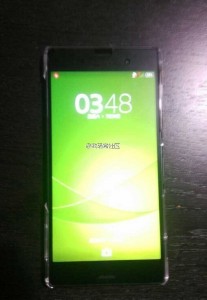 The last compact smartphone in Sony's Xperia range was the Sony Xperia Z1 compact. Given it's size, the device has some relatively impressive specifications. Apart from boasting a quad-core 2.2 GHz Krait 400, the device also has Sony's trademark 20.7 MP rear camera. This is coupled with 4G support and water proofing. The Z1 also has a thickness of mere 0.37". From the looks of things, it looks like the Xperia Z3 Compact will be following these footsteps.

While little is known yet about the performance specifications of the device, from the looks of things alone the Xperia Z3 Compact is going to be a very 'compact' device indeed. The pictures show a relatively slim device. This is coupled with thicker upper and bottom bezels and a design which might as well hint towards the Xperia Z3 Compact being waterproof as well. The rear camera also looks quite similar to that on the Z1 compact. This is coupled with a thin device, which is in line with previous Sony smartphones. While nothing is for certain as of yet, Sony might be gearing for two Xperia Z3 releases at this year's IFA. Stay tuned for more folks!