Xiaomi is gearing up to announce its Mi6, with a teaser suggesting that the flagship is going to be unveiled on April 19. From the looks of it, the Mi6 might be the first high-end smartphone from the Chinese manufacturer to tout a dual-camera setup and the latest teaser might give away more information regarding this.

The company’s social media page on Weibo highlights the dual-camera feature that will be present on the Mi6. Most dual-camera configurations that you see on smartphones behave in a completely different manner. For example, the iPhone 7 Plus has a secondary lens that features 2X Optical Zoom functionality and allows users to capture images and videos without degrading quality while zoomed in.

108MP Cameras and 10x Optical Zoom Expected From Smartphones in 2020, According to Tipster

Thanks to leaked hardware specifications, we know that both Mi6 and Mi6 Plus will feature a Snapdragon 835 chipset while featuring a 5.15 and 5.7-inch display respectively. Sadly, most readers will be disappointed to hear that the resolution has been tipped to be locked at 1080p instead of the favored 1440p.

To our knowledge, and thanks to a leaked image sample, the secondary lens on the upcoming Mi6 could feature 5X Optical Zoom capabilities. However, it still has not been clarified if the feature will be found on the Mi6 Plus or the smaller counterpart. A better business approach would be to give the Mi6 Plus exclusive features so that users surface that much-needed motivation of spending more money to take advantage of the features. The 5.7-inch display will undoubtedly have a bigger battery capacity and possibly more RAM. 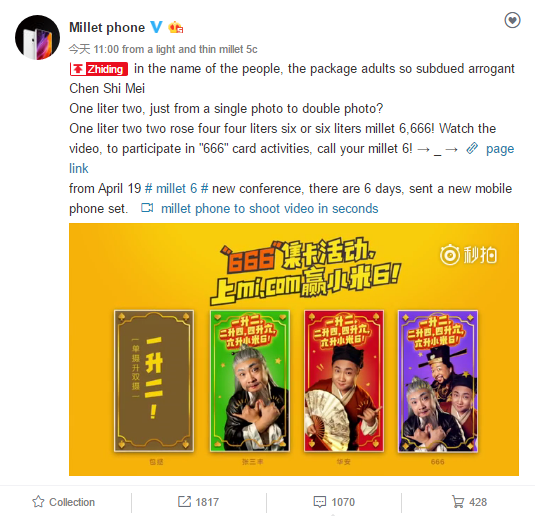 Both phones have also been rumored to be IP67-certified, which is one rating below Samsung’s IP68 water-resistance rating. Like previous Xiaomi’s flagships, both of these are not expected to ship with expandable storage so know beforehand how much storage you will require before setting on your purchase.

Are you excited that Xiaomi Mi6 might potentially be the first smartphone to feature a 5X Optical Zoom functionality? Let us know your thoughts right away.