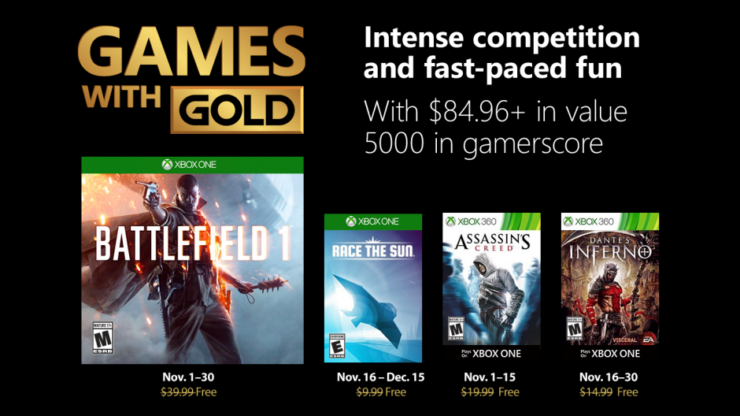 The highly acclaimed first-person shooter, Battlefield 1, is coming to Games with Gold! Fight to survive in the adventure-filled single-player campaign or join up to 64 players in epic multiplayer battle. Destructive environments, dynamic weather conditions, and vehicle-based combat in land, sea, and air are yours to experience as you dominate the battlefield.

Test your coordination and reflexes in Race the Sun. Inspired by arcade games of the past, short games sessions are mixed with nerve-wracking tension and pure fun as you hurtle your solar-powered craft at breakneck speeds in a race against time. The rules are simple: Don’t crash, stay in the light, and don’t slow down!

Plug yourself back into the Animus in the game that started the franchise in Assassin’s Creed. Relive the adventures of your assassin ancestor, Altaïr, at the start of the centuries-long battle between the Assassins and the Templars over the mysterious artifact, the Apple of Eden.

Begin your epic quest of vengeance and redemption in Dante’s Inferno. Based on the classic poem, rescue the soul of your beloved Beatrice from the Nine Circles of Hell in this fast-paced action title. To succeed, you’ll need to confront fierce monsters, hideous demons, and your own personal sins.

Which of these are you most excited about? Let us know in the comments!