Blizzard’s upcoming vanilla server option for World of Warcraft, WoW Classic, is likely to use the original character models and animations.

At least, that’s what can be discerned from a recent job listing for a ‘Software Engineer (C++)’ on Classic WoW.

“Do you long to travel back to Azeroth before the Mists of Pandaria parted, and before Deathwing broke the world”, the job listing reads. “When the fog obscured the view into the distance, and weather had just been added? Do you have fond memories of the original character animations, and spell effects? Can you help us restore that look to our modern engine? Then the World of Warcraft Classic Engineering team has an opportunity for you.” 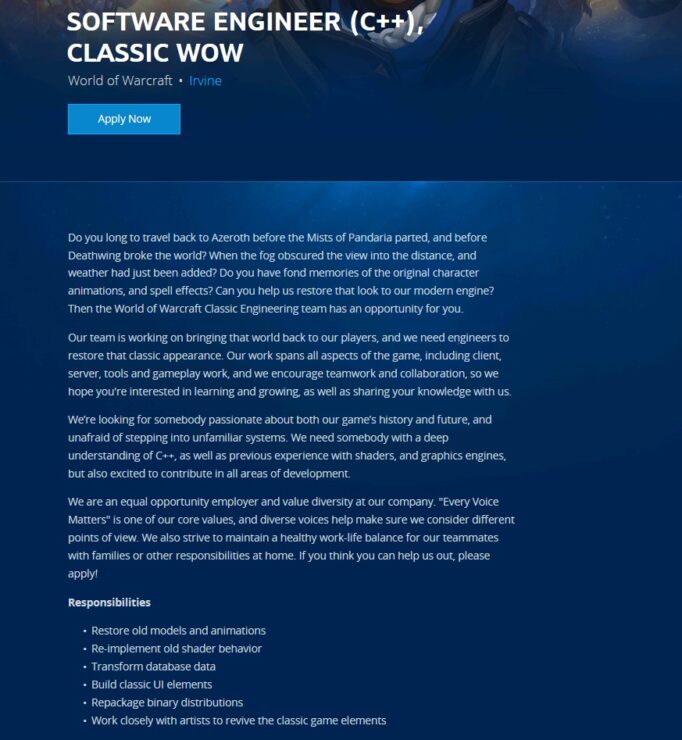 Blizzard adds that its “team is working on bringing that world back to our players, and we need engineers to restore that classic appearance. Our work spans all aspects of the game, including client, server, tools and gameplay work, and we encourage teamwork and collaboration, so we hope you're interested in learning and growing, as well as sharing your knowledge with us.”

The job listing explicitly mentions that the engineer will be charged with “restoring old models and animations” alongside re-implementing “old shader behavior”. In addition, Blizzard wants to “build classic UI elements” that Vanilla WoW is known for.

From the looks of it, Blizzard is really trying to restore the classic World of Warcraft experience that players appear to be longing for. Last week we already reported that WoW Classic will use patch 1.12 ‘Drums of War’ as foundation for the game.

“As many of you have noted, the classic period was two years long and full of changes", Blizzard wrote. "Core features like Battlegrounds were introduced in patches after WoW’s original launch, and class design similarly changed over time. After careful consideration, we decided on Patch 1.12: Drums of War as our foundation, because it represents the most complete version of the classic experience.”