To clear up confusion surrounding Windows Blue, let me tell our readers that Microsoft isn't going to call it Windows 9. Its not Windows 9. According to multiple sources, Microsoft will actually released Blue as part of the Windows 8 wave and not as an entirely new Windows platform update. It is going to be a refreshed version of Windows 8, and is expected to be released to manufacturing partners sometime in August. When it is going to be publicly released, Blue will lose its codename and will actually be called Windows 8.1. 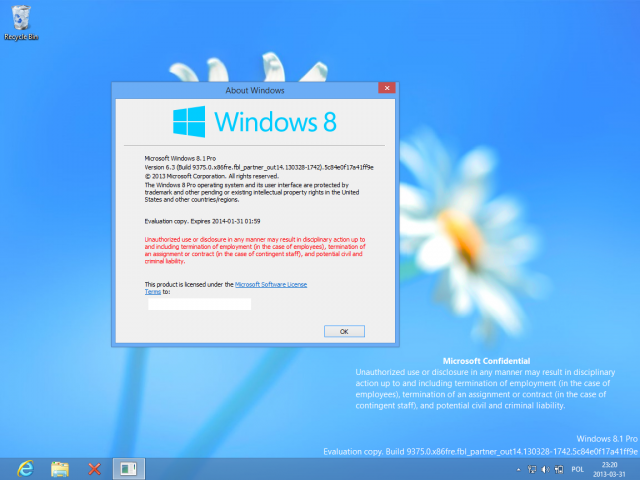 The screenshot of the latest Windows Blue leaked build shows the Windows 8.1 moniker. A couple of Windows Blue leaked builds have surfaced in the wild, the previous carried build number 9364 and it was leaked over a week ago. The latest is build 9375. The builds are easily available from file sharing sites, though keep in mind that they are not meant for the public and installing them on your machine is not recommended.

CNet's source indicates that for Windows Blue public release Microsoft will be using the same branding strategy it uses with Windows Phone updates. For example when the Mango update was released, which became Windows Phone 7.5, it was released as a part of Windows Phone 7 wave, and not as an entirely new platform update. The same will be done in this case, where the top level branding will be Windows 8 and Windows 8.1 will just be a part of it. The source also claims that Microsoft will title Blue for Windows RT as Windows RT 8.1.

We're seeing an interesting trend here from Microsoft. If Windows Blue does turn out to be Windows 8.1, we can see subsequent updates being rolled out with 8.x monikers. Officials are tight lipped about this update and haven't revealed more than simply accepting the fact that Windows Blue is an upcoming update.