Windows 10 Mobile Reportedly Rolling Out to Some Windows Phone Devices

Microsoft is yet to officially announce a date for the worldwide release of Windows 10 Mobile. Windows Insider members receive the preview builds now and then, but non-Insider users are yet to experience the mobile operating system on their devices. Some latest reports from the Middle East are giving good news as users have reportedly started to spot the OS upgrade notifications. 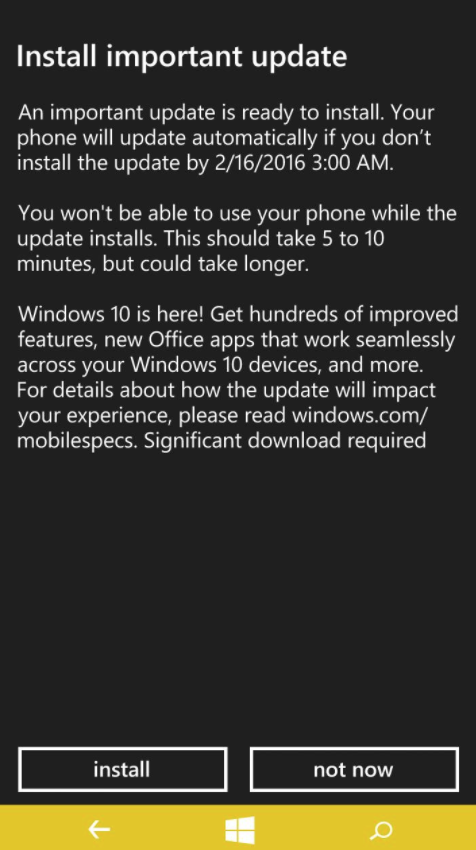 Users have long been waiting for Microsoft to give the carriers go-ahead to start sending the Windows 10 Mobile firmware update to Windows Phone devices. Earlier, some carrier reports revealed that they are already done with the testing process and are waiting for Microsoft's approval. While we are still waiting for the official word, it appears that some Windows Phone handsets are already seeing the upgrade notification. WMPU reports that some users in the Middle East are getting the notification to upgrade to Windows 10 Mobile.

[...] upgrade to windows 10 mobile appears to be rolling out to Lumia 535 owners in Egypt and Jordan.

There is no information about which other devices except for the Lumia 535 are receiving this update, nor is there any detail of the firmware version users are receiving. As you can see in the screenshots below, the notification simply states "Windows 10 is here!" However, there is no way to confirm if these are simply rumors or legit reports. Do note that with the latest Windows 10 Mobile preview build 10586.107, Microsoft rolled out an updated and improved upgrade experience. The message that is shown in the screenshots allegedly receiving official Windows 10 update on the Windows Phone handset, is the same that Slow ring members received with the last preview update.

With a lack of confirmation, we will have to take this latest report with a pinch of salt. Gabe Aul has been giving hints about Windows 10 Mobile public release being imminent. Let's hope it's finally here. If you are in the Middle East or anywhere else and have received similar upgrade notification, don't forget to share the good news with us in the comments.