Windows 10 Mobile 10586.71 Screenshots Leaked Ahead of Its Release

We shared with you a report yesterday revealing that Microsoft is planning to release a cumulative update for Windows 10 desktops. It also claimed that the company might roll out the same update for Mobile insiders today. Now, as we wait for any such updates to hit Windows 10 devices, leaked Windows 10 Mobile images show the expected build number 10586.71.

Microsoft is working on another cumulative update for Windows 10 devices, as revealed in earlier reports. New screenshots are trying to give us a peek into this leaked Windows 10 Mobile 10586.71 build that have come through the folks of WinBeta. The build isn't expected to bring any major features as the focus remains on fixing the bugs and stabilizing the operating system before it is released to the general public, later in February.

There is no information about what bug fixes are we talking about here, but we will know more when (and if) this leaked Windows 10 Mobile build 10586.71 comes to the Fast ring members of Windows Insider program. Earlier reports in the month had claimed that Microsoft is preparing the final release of Windows 10 Mobile for WIndows Phone devices in February. Some internal carrier documents have already revealed that the build (a previous one) is already tested by them and is awaiting Microsoft's approval. 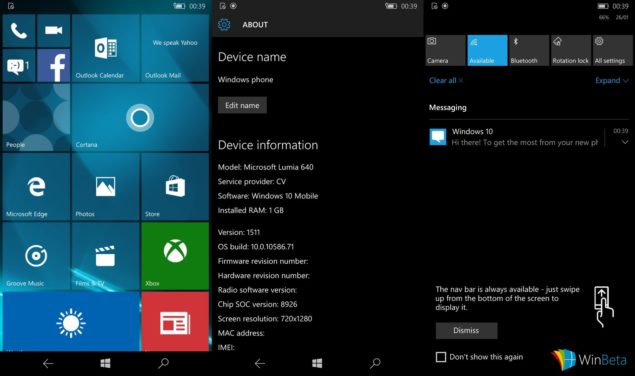 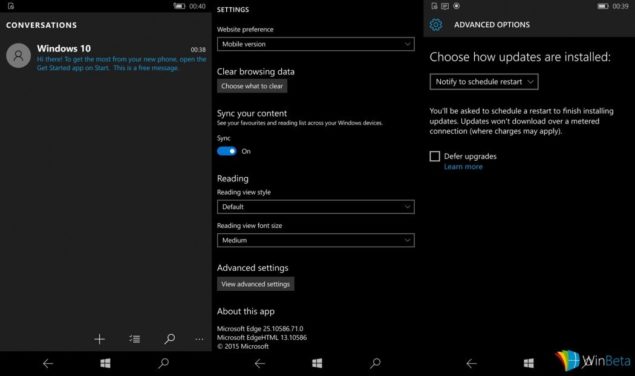 We will update our readers when Windows 10 10586.71 is released to desktop and mobile devices later today. As we have experienced previously, sometimes even the most confirmed builds don't make it to the users due to any last-minute server issues or other critical bugs found in the builds themselves. Let's hope nothing such happens today and the new builds for desktops and mobile devices are smoothly rolled out to desktop users and Windows 10 Mobile Insider members.