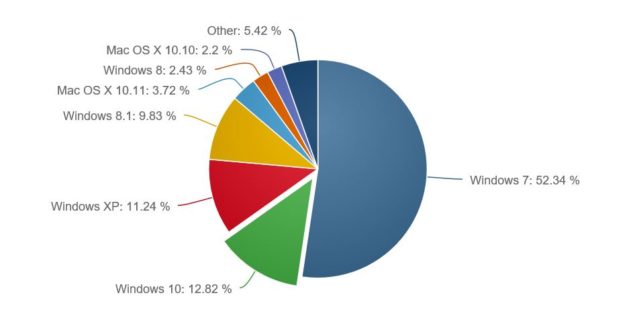 Slow but steady is what seems to be gaining numbers for Microsoft's latest desktop operating system. The latest statistics for the month of February from Net Applications reveal that Windows 10 usage went up to 12.82% of all the PCs worldwide. In January, Windows 10 had a global market share of 11.84% in desktop computers, and 9.96% in December 2015. Only 1% up from January, the operating system is slowly moving towards Microsoft's goal of reaching a billion devices in the next two years.

Microsoft has been offering its latest Windows 10 operating system as a free upgrade to Windows 7, Windows 8 and Windows 8.1 users. With reports and confirmations of some large businesses (including 4 million PCs of Pentagon) upgrading to Windows 10 Enterprise in the next year, the market share will only grow positively.

Windows 7 is still the number one desktop operating system worldwide, however, its share is super slowly dropping. February saw the operating system's market share at 52.34% with a slight drop from 52.4% in January. It will take Microsoft a lot more than just a free upgrade offer to convince these users to make the switch to the latest operating system. Windows 7 is followed by Windows 10 as the second most used Windows operating system, with Windows XP and Windows 8.1 in the third and fourth positions, respectively.

Microsoft has officially confirmed that over 200 million devices are running Windows 10 and Windows 10 Mobile globally. However, there hasn't been any official update from Microsoft after that achievement was shared at the start of January. The company is expected to offer the latest numbers at the end of this month during the 2016 Build Developer Conference.

- How to Bring Back Missing “Open with” in Windows 10