Microsoft released the Windows 10 Preview build 10547 to Insiders nearly two weeks back. This was followed by a speculation that a new Windows 10 10550 build will be dropped to insiders at the end of last week. However, that didn't come to grace our machines. While Microsoft isn't likely to release another Windows 10 build this week, it certainly doesn't mean that the company isn't testing more features and improvements, internally. A new leak coming from China confirms just that, with a few interesting screenshots. 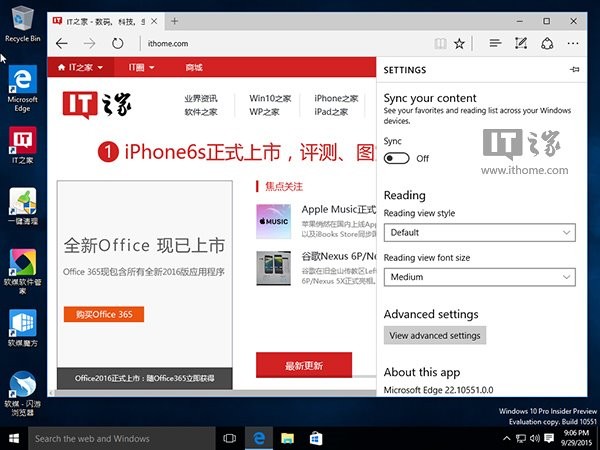 Leaked Windows 10 build 10551 screenshots reveal several new features in Microsoft's Edge browser. Edge browser has long been anticipated to receive new enhancements, including Tab Previews, however, we haven't yet seen these in the builds rolled out to insiders. It appears highly likely that the leaked Edge features will be part of the upcoming Windows 10 preview build, whenever it is released to WIP.

At least two of the new Edge features are part of Windows 10 build 10551. The first of these brings synchronized bookmarks to Edge, similar to Chrome. Synchronized bookmarks will help Windows users to access Edge bookmarks across all the Windows 10 devices seamlessly. This setting is disabled by default, but it can be toggled on as seen in the image shared above.

The second Windows 10 Edge feature is the possibility of opening a new window with a middle click on the desktop shortcut or taskbar and Start menu icon of the browser. This feature has also been used by other browsers for long, which means Microsoft is simply trying to improve its browser by keeping up with all the features that enhance usability and accessibility of the browser.

These features have been a few of the top requests that Insiders made via the Feedback program. Microsoft implementing them in the internal builds is another sign of the company actively listening to and working on the community feedback.

If you are excited to see these new Microsoft Edge features arriving to your devices, it is nothing but a game of speculation right now. With Microsoft scrapping the release of Preview 10550, we might be seeing a new build releasing to insiders in the coming weeks, carrying all these fancy features in the Edge browser.