Both PlayStation 4 and Xbox One have almost completely taken over the internet gaming community. The combat between both the video game consoles is tightening up and it is difficult to decide which console will prove to dominate in the coming future. As people are becoming more concerned about the performance and hardware of both consoles, even entertainment program directors have started to benefit from the situation. 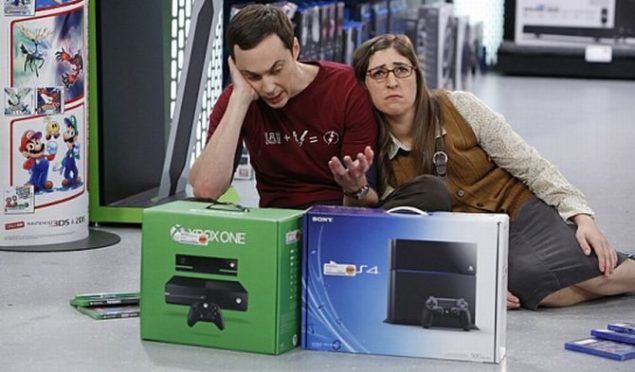 Choosing which "side" to join in gaming is nothing new. It is coming along for years, but specially now, when two greatest rivals in the gaming industry have drawn their latest weapons, it has become very important to choose a side. There are various things you should be concerned about before buying your new console and don't worry, several people will help you in the process, just like Sheldon did the math for you.

Its hard to decide between two systems when both of them have their own perks. Resolutions, frame rates, hardware sales etc, all these things have come to be of importance now. Well, if you're still troubled in deciding or you just want a laugh on the console war, you should watch The Big Bang Theory's leading character decide between PS4 and Xbox One.

Latest episode of the popular geek-focused television series The Big Bang Theory titled "The Indecision Amalgamation" featured the protagonist Sheldon's dilemma while he decided to choose between PS4 and Xbox One. Thanks to YouTube user FuriousWannabe, now you can see the hilarious video featuring all the scenes about PS4 and Xbox One from the episode. How hard can it be to choose between two consoles? See it for yourself in the video below.