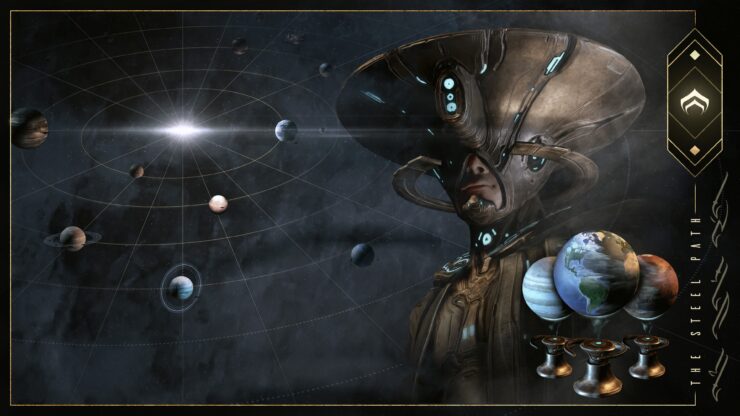 This week, Digital Extremes announced The Steel Path, a 'Hard Mode' devised specifically for those Warframe players who have completed the entire Solar Map and would now like to unlock an extra level of challenge. The Steel Path isn't live yet, but it is now available in the Public Test Cluster; if you're interested in checking that out, enter the opt-in key lottery here.

Teshin has an opportunity for Tenno who have proven themselves. Those who have completed the Solar Map will be invited to unlock THE STEEL PATH from Teshin in a future update.

The details of THE STEEL PATH are as follows. These are not complete Patch Notes. We wanted to give everyone a chance to review details on The Steel Path in a very simple Dev Workshop. Just over 1000 Tenno will be playing these changes over the weekend for practical feedback.

What it is:
✅ Higher Difficulty Series of content that rewards exclusive cosmetic decorations, emotes, and mastery.
✅An extra layer of opportunity for players to use their powerful gear to take on threats at a higher level without having to wait in missions for long periods of time.
✅ A way to engage with some better scaling Affinity and Mod Rewards.

What it isn’t:
❌ - intended to be associated with the nebulous ‘end game’ topic.
❌ - overly complicated in its goal to simply provide higher level content and some exclusive rewards.
❌ - tiered. We are providing one 100+ level pass to be cognizant of matchmaking for our first iteration.

Earlier this year, Digital Extremes owner Leyou Games revealed that Warframe would be available on both PlayStation 5 and Xbox Series X as well as 'other devices'. Given that Warframe is already out on PC, PlayStation 4, Xbox One and Nintendo Switch, we can surmise those devices to be mobile platforms (Android/iOS).