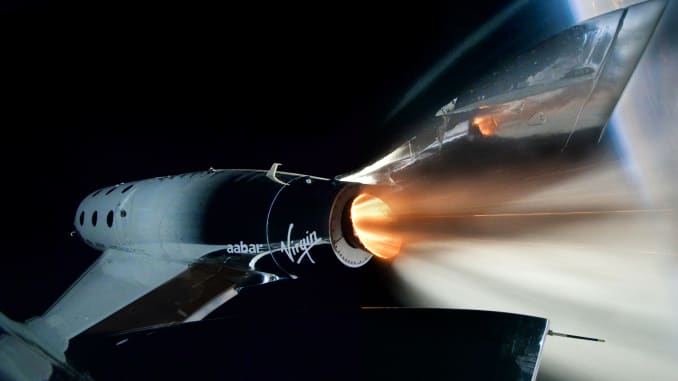 Virgin Galactic (NASDAQ:SPCE), the pre-revenue commercial spaceflight company, has seen its stock price largely rangebound in the sub-$20 zone following a plunge from all-time highs back in February 2020. However, the company has been persistently working toward realizing its goal of commercial operations, gradually rebuilding a bullish case in the process.

In this backdrop, Virgin Galactic bulls have recently received a fresh impetus following a string of stock price target upgrades from Wall Street heavyweights. As an illustration, Credit Suisse resumed its coverage of the stock today with an ‘Outperform’ rating and a stock price target of $24. Credit Suisse analyst, Robert Spingarn, also commented on the upcoming Virgin Galactic powered test flights in his investment note:

"We now know to expect two more test flights, both powered, one with two pilots and the second with a full crew. Since these two flights (expected during Q4 and early Q1) are intended to complete the full sub-orbital mission, their achievement should be significant positive catalysts for re-rating."

As a refresher, Virgin Galactic had disclosed as part of its Q2 2020 earnings:

"Virgin Galactic expects to advance to the next phase of its test flight program with its first powered spaceflight from Spaceport America this fall, with two test pilots in the cockpit. Virgin Galactic then expects to conduct a second powered space flight from Spaceport America, with a crew of two test pilots in the cockpit and four mission specialists in the cabin. Assuming both flights demonstrate the expected results, Virgin Galactic anticipates Sir Richard Branson’s flight to occur in the first quarter of 2021."

The launch window for this new testing phase begins on the 22nd of October. As far as the ‘Blue Sky’ scenario for Virgin Galactic is concerned, Credit Suisse noted:

Today’s endorsement follows another resounding one from UBS yesterday. Analyst Myles Walton initiated Virgin Galactic’s coverage with a ‘Buy’ rating and a $25 stock price target on Tuesday. While forecasting that the space tourism would become a $38 billion per annum industry by 2030, Walton observed:

"We see Virgin Galactic as the only way for consumers to gain entry into the ~560 member astronaut club in the next 5 years. There will be competitors, but the curation of the VG product from marketing to life-long brand connection, in addition to an operating model supporting a uniquely high flight-rate, separates the VG experience from the others."

Of course, Cowen Inc. (NASDAQ:COWN) had stated in an investment note published on the 31st of August:

"[Virgin Galactic] is uniquely positioned to benefit from the growing consumer interest toward luxury experiences, especially among high-net-worth individuals."

Cowen analyst, Oliver Chen, had gone on to add:

"We believe a substantial growth opportunity lies ahead with the commercial spaceflight business, which already has [approximately] 600 reservations, and the development of high-speed point-to-point travel."

The chart below summarizes the stock price upgrades that Virgin Galactic has received from Wall Street analysts in recent days:

Virgin Galactic shares have been responding positively to these analyst endorsements. As an illustration, the stock is up nearly 5 percent in the current pre-market trading session.