On Tuesday, Apple announced some changes in its MacBook lineup such as price cuts, redesigns, and upgrades. Two devices, the MacBook Air and the entry-level variant of the 13-inch MacBook Pro received an update, and with the MacBook Pro benchmarks already here, it’s evident in these scores that the upgrade in hardware was long overdue.

Surprisingly, the Core i7 Version of the Same MacBook Pro Scored Less in the Multi-Core Test Results Compared to the i5 Variant

The lowest-end version of the new entry-level 13-inch MacBook Pro is powered by Intel’s latest Core i5 chip, which has four processing cores, unlike the seventh-generation Core i5 that fueled the 2017 model, which had just two cores. So, right off the bat, we can expect the newly released model to offer considerably better performance and the early MacBook Pro benchmarks seem to promise just that. 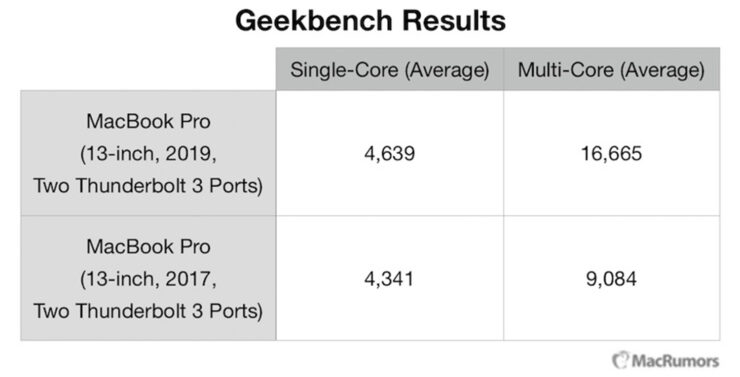 The 13-inch MacBook Pro is also available in the 8th-generation Core i7 processor configuration. This processor also features a quad-core and is clocked at 1.70GHz while offering Turbo Boost frequency of 4.50GHz. For this variant, only one Geekbench result is available, according to which it obtained a single-core score of 4,835, and a multi-core score of 15,515. This is a performance improvement of nearly 60 percent over the 2017 model, but it’s strange how this model managed to obtain a lesser score in the multi-core test results compared to the Core i5-powered machine.

The updated hardware starts at $1,199 for students ($1,299 for regular customers) and Apple claims it’s two times more powerful than the older variant. The new model also ships with the Touch Bar, the T2 security chip, and the Touch ID fingerprint sensor, giving users access to more features while being priced the same.