With the delay of Uncharted 4: A Thiefs End to 2016, new opportunities have opened up for  for Naughty Dog. The developer wants to meet the "high standards" of the game in order to satisfy the "ambitious" ambitious fans of the Uncharted series.

Since we showed you our first gameplay reveal of Uncharted 4: A Thief’s End, more of the game and story have come together, and it’s become clear to us that this game is much more ambitious than we originally envisioned.

Thank you for your patience — we know the extra wait will be excruciating, but you’ll see it will be worth it as we reveal more about Uncharted 4 over the next year. The team at Naughty Dog will be heads down working through 2015 making sure that Nathan Drake’s story gets the closure it deserves. Come Spring 2016, you and Nate are in for one thrilling, emotional ride.

You can read more about the delay of Uncharted 4: A Thiefs End here. And after that, it's been quite some time that we've heard about the Uncharted franchise but now we have additional news on the Uncharted series to share.

As it turns out, that Naughty Dog did have plans for the meantime. The heavily rumored Uncharted Trilogy is about to hit the shelves on the PS4 by a Swiss Retailer. The listing includes all three main components: a release date, price, and a box-art. You can check out the full listing yourself here(The link might be taken down if it was uploaded earlier than planned, My guess is that Naughty Dog wanted to keep this information for E3.) 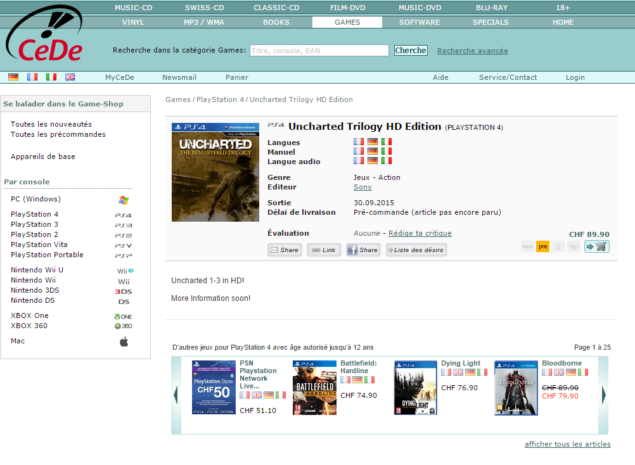 The release date for the Uncharted Trilogy has initially been revealed for Wednesday, 30th of September and the description reads the following.

Guess we do have more coming as the PS3 versions were in HD aswell and "Uncharted Trilogy HD" cannot possibly be the only selling point Sony will be aiming for. Additionally, what supports this rumor strongly is the fact that Uncharted 4 was pushed to 2016 and that such a combination was rumored for a long time so we might aswell see on in the near future. But it so happens that neither Sony nor Naughty Dog has officially confirmed any such release. Do share your own views, in the comments section, about the release of the Uncharted trilogy on the PS4 and if Sony and Naughty Dog are heading in the right direction with such a release.