“Everybody in This Room Has to Like Me – At Least a Little Bit,” Trump Tells Tech Leaders Representing $3 Trillion 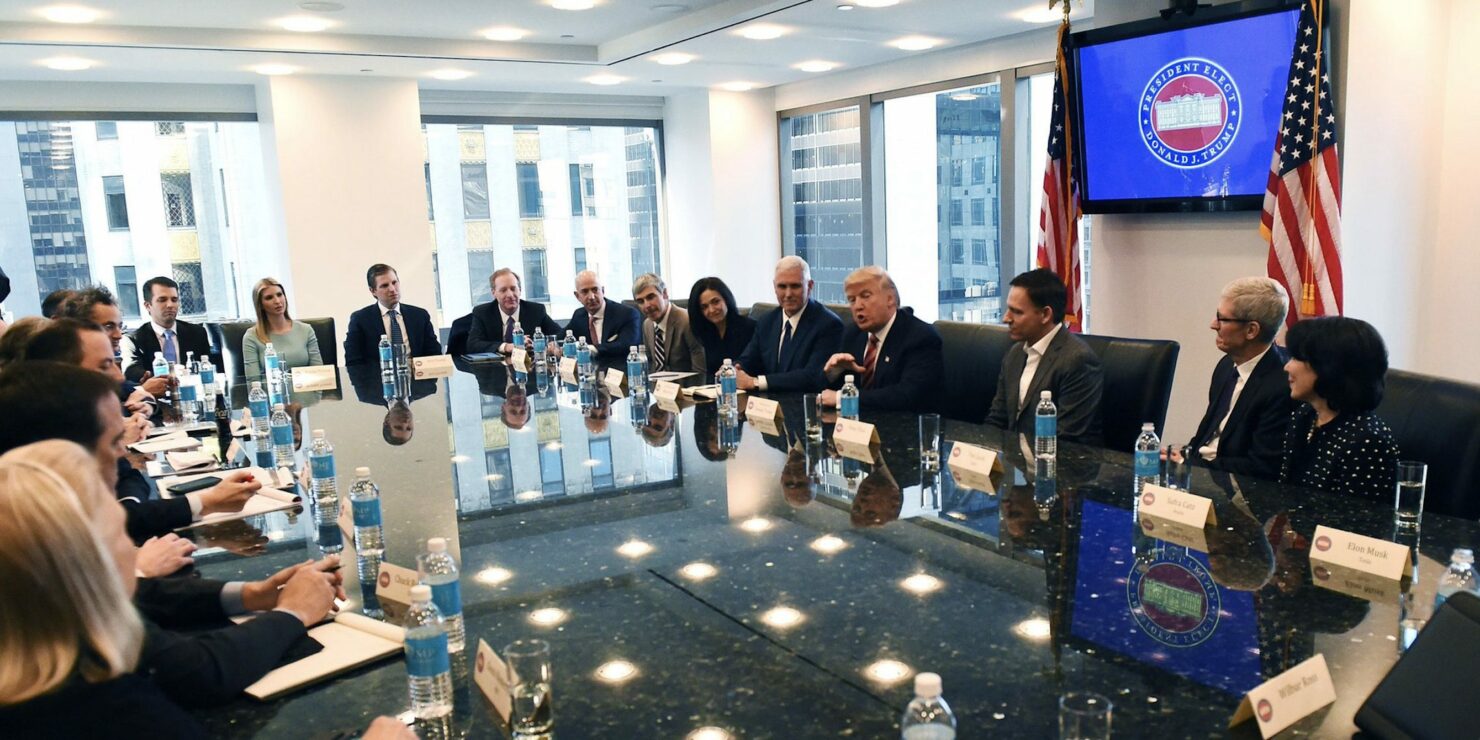 President-elect hosted leaders of some of the world's most elite and successful technology companies on the 25th floor of his Trump Tower. It was one awkward moment in history - Donald Trump hadn't shied away of criticizing several of these guests. And the Silicon Valley giants, in turn, had hit him back with their own concerns and harsh criticism.

Guests at the table included Apple CEO Tim Cook, Alphabet CEO Larry Page, Amazon CEO Jeff Bezos, Tesla CEO Elon Musk, Facebook COO Sheryl Sandberg, Microsoft CEO Satya Nadella, and other tech luminaries. Vice President-elect Mike Pence, Trump's advisor Peter Thiel, and three of Trump's children were also present at the meeting. While the executives did not speak to the press, media were allowed in to capture the start of the meeting, giving us a slight insight on what was going on.

Trump's meeting with the tech leaders

As reported earlier, there was no formal agenda for the meeting, but the discussion was expected to focus on jobs. Early reports claim that immigration, manufacturing, jobs, and China were central topics of discussion. Trump opened the meeting by praising the technology executives in attendance, saying “there’s nobody like you in the world.”

"Anything we can do to help this go along, and we’re going to be there for you,” President-elect told the room full of people who represented $3 trillion and 1.3 million US jobs. "You’ll call my people, you’ll call me. It doesn’t make any difference. We have no formal chain of command around here."

“I’m here to help you folks do well,” Trump said. “And you’re doing well right now and I’m very honored by the bounce. They’re all talking about the bounce. So right now everybody in this room has to like me — at least a little bit — but we’re going to try and have that bounce continue."

Trump met with America's biggest tech companies in an effort to look for common ground after an exceptionally heated election. According to USA Today, there was at least one area where the group agreed - reforming tax code. President-elect explained that his plan to slash the corporate tax rate from 35% to 15% that will make it significantly easier to repatriate money kept overseas. "We’re going to make it a lot easier for you to trade across borders," he said.

"We’re going to make fair trade deals,” Trump said. “We’re going to make it a lot easier for you to trade across borders. There’s a lot of restrictions, a lot of problems that I think you see. And if you have any ideas on that, that would be great.”

In a statement, Amazon's Jeff Bezos called the meeting very productive. "I found today’s meeting with the President-elect, his transition team, and tech leaders to be very productive. I shared the view that the administration should make innovation one of its key pillars, which would create a huge number of jobs across the whole country, in all sectors, not just tech - agriculture, infrastructure, manufacturing - everywhere."

George Zachary, a venture capitalist and friend of Elon Musk, told CNN that he saw the meeting as being "all about appearances." But, "there is at least the impression of communication going on" between the upcoming administration and Silicon Valley.

Musk and Cook were planned to have one-on-one talks with Trump privately, following the meeting. We will update our readers as more information comes forward about the specific meeting agendas of these two companies.