2014 has come and gone and we thought that the time is ripe to do a top 10 aggregation post. We pulled out the site metrics and crunched the top 10 PC hardware posts on Wccftech based on interaction, engagement and traffic. Without any further ado, here is the countdown: 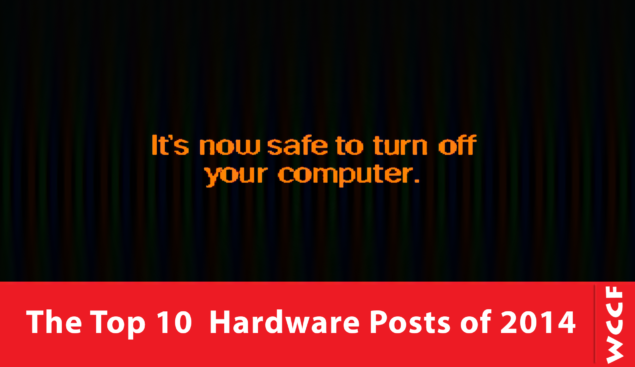 This particular rumor re-sparked interest in the r9 390x after the original leak that occurred some months back. In it we talk about the possibility of HBM and 20nm on AMD's flagship GPU along with the utilization of Hydra Cooling on high end Radeons. Read More.

No. 9 - Intel Broadwell to Push GPU Performance by 40% Over Haswell

This particular leak was actually published 2 years back in 2012 but surprisingly gained a huge amount of traffic in 2014. Search trends are weird, what can I say. As the topic hints, the leak was about Intel bringing a 40% increase in GPU performance with Broadwell. Funnily enough at that time, the industry expected broadwell to land shortly. Anyways,  Intel did deliver on their promise judging from the recently leaked benchmarks of Broadwell-U. Read More

Another article on Intel's integrated graphics processors published almost 9 months ago. This one talks about 5th generation Intel graphics, listing SKUs and talking about leaked/confirmed details. The key part of this write up was the fact that Intel was bringing Iris Pro graphics for the first time to desktop socketed CPUs. Read More

A very straightforward leak, direct from the Taiwanese supply chain. It reveals details about the 100 series chip set and the support of the (then) new DDR4 memory standard as well as GT4e graphics. The 'e' suffix denotes the eDRAM present on the die and signaled a new innovation in desktop graphics technology. Read More

As always, the title is self explanatory. This post was one of the first confirmed set of benchmarks that leaked before the launch of the GTX 970 and 980. The performance difference was disappointing to some and reasonable to others, but this was before we learned of the new price point of Nvidia's GPUs.  Read More

A nearly year old post that was published at the time of the launch of the Kaveri flagship APU from AMD. I still remember the hype about this chip was too damn high, and it did meet its preceding reputation to some extent. We also got to have our first look at Mantle API in this post. Read More

This leak is about slides showcasing AMD's HBM memory and the huge plethora of hints that the memory standard will feature in the R9 300 series. The write up goes over the multiple variations of stacked dRAM including the 2-hi and 4-hi combinations as well as some speculation on the arrival of said standards. Read More

No. 2 -  PlayStation 4 GPU Vs Xbox One GPU Vs PC – The Ultimate Benchmark Comparison

One of the more exploratory editorials I have done, this post saw us attempt to quantify the raw graphical performance of the Xbox One and PS4. We used a proprietary equation system from DG Lee and the publicly available information on the APUs present inside the consoles to simulate performance virtually. The results were, needless to say, very interesting. Read More

And here at last folks, is the No. 1 PC Hardware Post of 2014. The launch of the Haswell-E was a relatively big event in the tech scene because it saw powerful octa-cores coming to the mainstream sector for the first time. Intel basically brought a new 8 core design to a mostly stagnant market and this post is evidence to the resulting bang - all for a nice price of course. Read More

And that is it for this roundup.