AMD's R9 Nano will be launching on the 10th of September, and AIBs have already started listing their various models. Gigabyte is one of the first such add in board partners that have presented their tiny short form factor monster from team Radeon. Not much is known about the performance and workings of this card except the raw specifications and what little that AMD told us during the paper launch. The Gigabyte R9 Fury will be rocking a price tag at or upwards of $650, which is the MSRP. 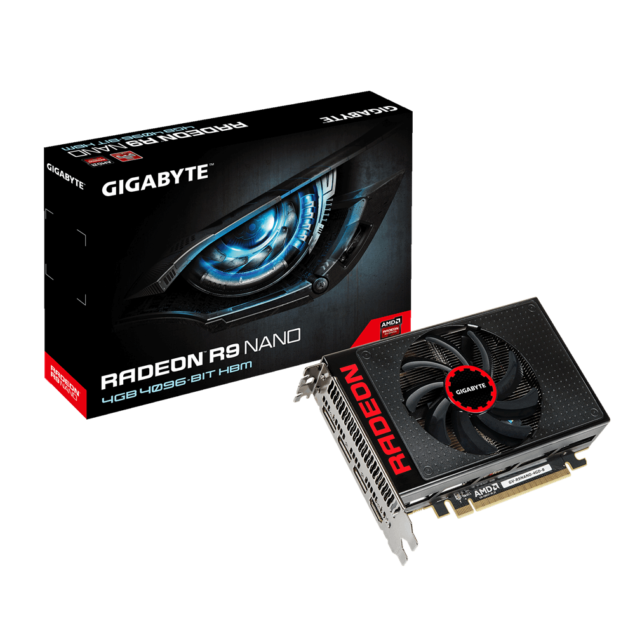 The R9 Nano has a full blown Fiji die and features an advanced power throttling algorithm that is not present on the Fury X; allowing it to remain cool (and not overwhelm the modest heat dissipation equipment) while maintaining peak efficiency. It has a core clock of 1000 Mhz, with an unknown boost frequency. With the advanced throttling algorithm in place, I doubt it will go much higher than this – if at all. Infact, I wouldn’t be surprised if it doesn’t have any set boost frequency to begin with. The card does have the OC Guru II tag on the box art so I assume overclocking is definitely on the table.

The card rocks a 4096 bit wide bus and 4GB of HBM memory clocked at 1000 Mhz effective. The recommended power supply unit of a system with this GPU is 600Watts (with support for one 8 Pin connector). We already know the card itself has a rated TDP of 175 Watts. The GPU has 1 HDMI port and 3 Display Ports. The design is purely reference in nature and we have reason to believe that AMD has not allowed any AIB customization of this particular GPU.

The Gigabyte R9 Nano graphic card features a tiny heatsink (by GPU standards) and a lone single axial cooler. Now that I have mentioned that, I cant help but wonder what would happen if someone were to mod onto it an after-market heatsink with double or tipple the heat dissipation capacity. Ofcourse, AMD has probably used cherry picked chips in the Fury Nano, so the results should be very interesting.

The R9 Fury X is tiny, measuring in at around 19 centimeters, but the Gigabyte R9 Nano is well, nano, at only 15 centimeters end to end. Its small form factor design would enable it to be fitted in the tiniest mini-iTX casings out there and its impressive efficiency would enable it to be remarkably powerful at the same time. The card rocks a full sized Fiji core with 4096 SPs. It is touted as being an efficiency monster with the same performance as the Radeon R9 290X but half the power draw.