AMD's flagship Radeon Pro Duo graphics card has been pictured in all its glory by Hardware Battle. The graphics card featuring two Fiji XT GPUs is on its way to become the fastest dual graphics card on the planet as its launch is planned for 26th April (according to rumors). We have seen several pictures of the cards being posted by sites but we can now take a closer look at one of the best looking dual GPU solution to date.

AMD’s Radeon Pro Duo will be arriving to consumers at the end of this month. The flagship graphics card from AMD was announced almost a year back and has undergone huge design changes. AMD initially wanted to built the Radeon Pro Duo an efficient card like their Radeon R9 Nano with an emphasis on performance per watt and compactness in terms of design but they unchained both Fiji GPUs on the card and went for a serious compute and performance oriented design. Hence became the Radeon Pro Duo. 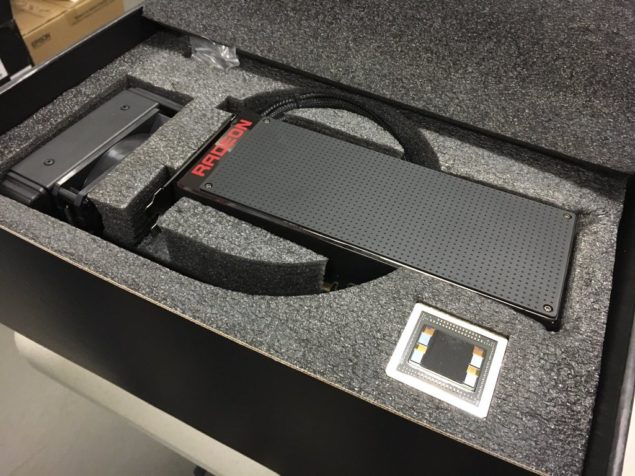 The Radeon Pro Duo comes with dual Fiji GPU cores that are clocked around the same specifications as the Fury series cards. The Radeon Pro Duo comes with two Fiji XT cores, each comprising of 4096 shaders that adds up to 8192 on the card itself. Each core has 64 raster operation units and 256 texture mapping units while the core clock is maintained up to 1000 MHz. This allows the card to deliver 16 TFLOPs of 32-bit single precision compute which is currently the highest any graphics card could offer. The dual Fiji GPUs really form a great duo as a FP32 oriented compute card but at the same time, lacks FP64 hardware which isn't available on Fiji GPUs.

The AMD Radeon Pro Duo is a really fast graphics card and as such requires three 8-Pin PCI-Express power pins to boot it up. The TDP of the card is 350W which is around the same wattage we should expect from dual-chip cards. Display outputs include four Display Port connectors.

AMD patched up with Cooler Master to develop the water cooling solution for the Radeon Pro Duo. While it has been little talked about, the cooling solution has to be one of the best looking designs ever created. The AIO water block and pump fitted underneath the GPU shroud is absolutely fantastic. The finish on the card is really sweet and the cooling system should run just as silent as the Fury X and AMD must have given special attention to the components to eliminate any coil whine which was an issue with recent cards.

The whole card makes use of a premium design that features sleeved tubing, soft touch front and back plates, LED logo, matte black PCB and ​nickel-plated aluminum chassis. Premium products like the Radeon Pro Duo do come at a premium price and AMD is asking $1500 US for their Radeon Pro Duo graphics card. 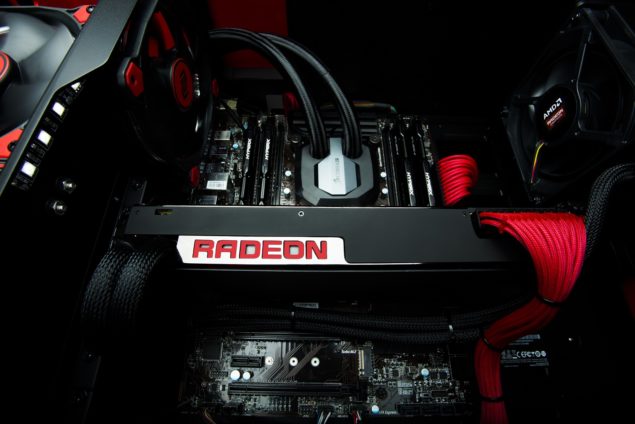 In the last article, we reported that the Radeon Pro Duo comes with a third Fiji GPU inside the package. The Fiji chip is in fact a real chip and not a dummy. The chip is packed to show the significance of the Fiji GPU which is not only the GPU powering the Radeon Pro Duo but the first graphics card to feature HBM memory on a special interposer that forms a Multi-Chip package. The only thing close to the Fiji GPU in terms of technology used and design is NVIDIA's Pascal GP100 GPU which was unveiled at GTC 2016 and will start shipping to supercomputers in June.

The Fiji GPU was a technical marvel at the time of its launch and still holds a special place in AMD's heart as it let them overcome several design hurdles that were faced during the development of the chip. AMD's will be featuring the next iteration of HBM memory on their Vega GPUs in 2017 followed by a new memory standard on their Navi GPUs in 2018.