About half an hour ago, Twitter user Alcoholikaust shared a new PS5 leaked image. The picture shows two PlayStation 5 development kits, which look exactly the same as the previous leak that confirmed the patent design uncovered by LetsGoDigital.

The most interesting part of this new leak is, however, the DualShock 5 (provisional name, as Sony didn't provide one yet) controller. While it is not nearly close enough to the camera to easily tell, there is one main detail that gives away it's probably not a DualShock 4: the absence of the light bar. As far as we can tell, the triggers may be larger and the sticks a little different, just like in the patent design (also unearthed by LetsGoDigital). There's also supposed to be a built-in microphone in the DualShock 5, though we can't really say with this leaked picture. 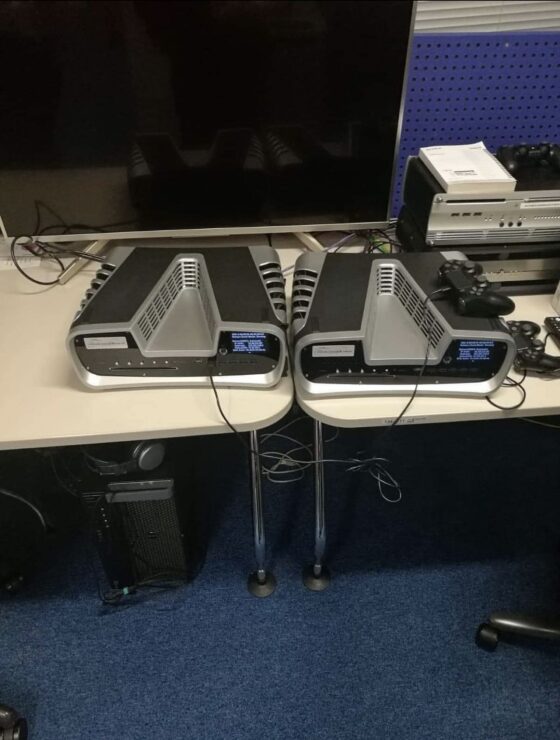 What we do know for sure about the DualShock 5 (again, provisional name, but we're betting Sony won't change it just like they didn't for the console) controller is what Sony officially shared a while ago. It'll feature much more advanced haptics feedback capable of providing different sensations depending on the surface the player is on in the game, thanks to 'highly programmable voice-coil actuators' situated in the controller's grips; it has improved speakers, presumably to deliver improved audio straight from the controller; the DualShock 5 also has adaptive triggers, offering different levels of resistance in order to provide the proper tension when nocking an arrow in a bow, for instance.

Its battery is said to be larger than that of the DualShock 4 (one of the PS4 controller's weaknesses) and it'll be charged through USB-C. However, the downside is that all of these improvements will make the DualShock 5 a bit heavier than the DS4, though (according to Sony at least) slightly lighter than the Xbox One controller with batteries.