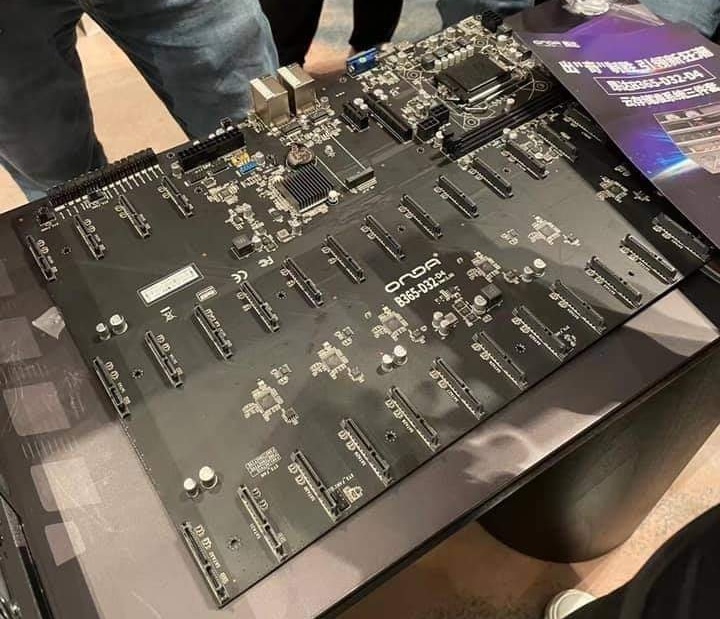 With the popularity of Chia Coin cryptocurrency mining rising in China, motherboard maker Onda has released its new motherboard that supports up to 32 SATA HDD & SSD storage devices at once.

Manufacturers are already working to offer Chia Coin dedicated mining SSDs and it looks like motherboards are getting dedicated mining versions for the cryptocurrency too. The board in question is the Onda B365 D32-D4 Magic Edition which features a total of 32 SATA ports that supports up to 32 SATA-based HDD and SSD storage devices.

The motherboard is based on the Intel B365 chipset and features four DDR4 DIMM slots and a single PCIe Gen 3.0 x16 and PCIe 3.0 x1 slot. The board measures at a massive 530mm x 310mm and power are provided to the motherboard through a 24-pin ATX and a dual 8-pin connector configuration for the CPU. Technically, what you are looking at is an mATX motherboard with an extended PCB to support all the SATA connections. I/O includes two Gigabit Ethernet ports, 1 USB 2.0, 4 USB 3.0, a VGA & HDMI port, and power on/off buttons.

As per the details provided by Onda, the motherboard has a total of six 6-pin connectors to power the SATA ports. The SATA ports can hold up to 448 TB storage capacity in either HDD or SSD NVMe standards.

The mining process of Chia Coin requires a large amount of free space and runs several reading & writing operations. In this case, endurance (TBW) is equally as important as speed, so consumer SSDs aren't the best choice for mining due to their lower endurance, and running these operations will significantly reduce the lifespan of an SSD. Hence, the target for these miners is primarily hard drives and data center SSDs. This motherboard could be a huge hit since Chia Coin mining is becoming more popular in the Asian Pacific region.

The Chia Coin Cryptocurrency has seen a large share of storage devices dedicated towards it which has prompted the rise in HDD prices across China. Tomshardware has a table which illustrates just how much the prices have risen over the last week:

There's no word on the pricing of this motherboard but it is already being sold directly to miners who are using this to build up their Chia Coin cryptocurrency inventory.