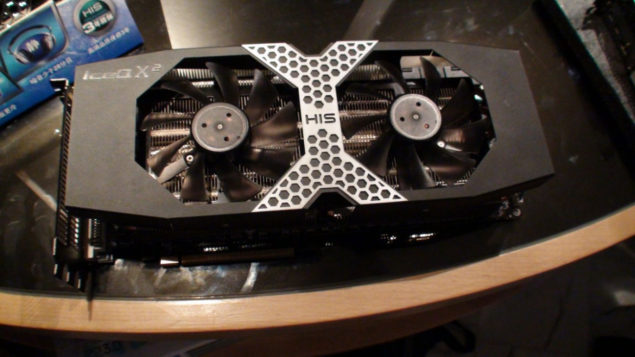 Only a group of selected media persons, including those from TweakTown had been given a sneak peek of HIS’s new custom PCB designed AMD Radeon HD 7970 X2; or rather a custom HD 7990.

Now many have said this is the world’s first dual GPU 7970 graphics card but nevertheless, PowerColor have apparently beaten them in the race first with their PowerColor HD 7970 X2 Vortex 3 Devil13 graphics card.

Other than that, the HIS card packs a custom IceQ X2 cooler and takes space of up to 3 PCI lanes. Powered by three 8 Pin connectors, the card has 4 mini DisplayPort connectors and a single DVI for display output.

Obviously with AMD taking more time on releasing its HD 7990, HIS seemed like it couldn’t wait any longer and hence came up with the X2 graphics card. Expect the TDP of the card to be at least 500W since the 7970’s cores are sure power hungry!